In association with Santa Barbara Tourism, Peter and Rebecca Work and their renowned Ampelos Winery created a memorable Pinot Noir for the red carpet “Secret Room” event and gifting suite. It is always a surprise when these promotional wines are made with such care and attention. Really a hit of the entire event and Rebecca was even there to pour and chat with celebs! 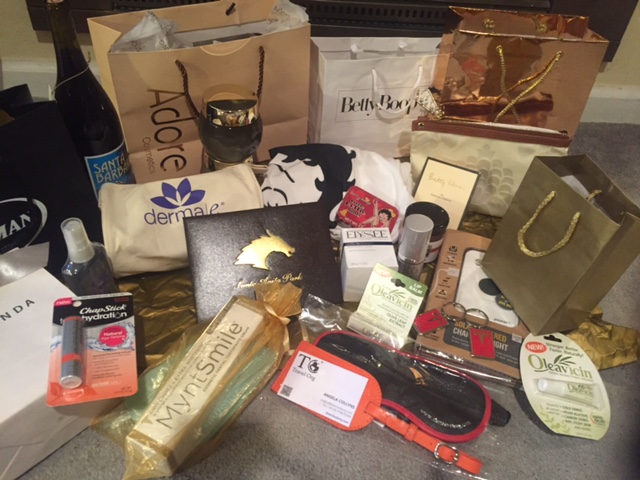 Not only were celebrities surprised when they received both a bottle of excellent Pinot Noir but Santa Barbara Tourism threw in an envelope containing surprises luring them to the wineries and restaurants of Santa Barbara County like hotel stays and free tastings.

Ampelos is Greek for “vine” and the Works actually have a small inn on the island of Folegandros, where they married. In the late nineties, they acquired 82 acres in what is now the Santa Rita Hills appellation.

Although the West Coast property maybe have been their retirement, a life-changing moment when a meeting was canceled on the morning of September 11, 2001 at the World Trade Center led them to pursue their wine-making dream earlier than projected. Their son, Don Schroder, now winemaker at the famed Seasmoke, was already in the business and led his parents to make fantastic Pinot Noirs and Rhone varietals.

Recently, Peter Work has guided actor Kurt Russell in his winemaking, so Hollywood intersects Ampelos Cellars in more than one way!

Gifting suites are abundant during awards season and one of the busiest is the Secret Room at the hip SLS Hotel in Beverly Hills. As celebrities make their way around the room, they visit representatives from different luxury brands that “gift” them with everything from cosmetics to jewelry to leather goods.

I attend as media. Although I act and produce, I am not quite a celeb. I do host red carpet interviews and hence my invitation to this shindig. Aside from my gift bottle of Ampelos’ Golden Globe wine, other standouts were a dinner at Santa Anita’s Chandelier Chef Series, Tesla rides and goodies, Adore and Dermaie skincare including anti-aging (a must in Hollywood), Oleavicin skin care from olive leaves and a gorgeous leather travel organizer aptly named the TravelOrg. Check out the photo for all of the booty.