Have you been supporting the Arts in the Santa Clarita Valley? The TPC/WEST RANCH art and wineGala is the only large-scale sell-out annual event that has, before the 8th event even began on Saturday September 26 at TPC Valencia, raised three-quarters of a million dollars for the arts community of Santa Clarita Valley. 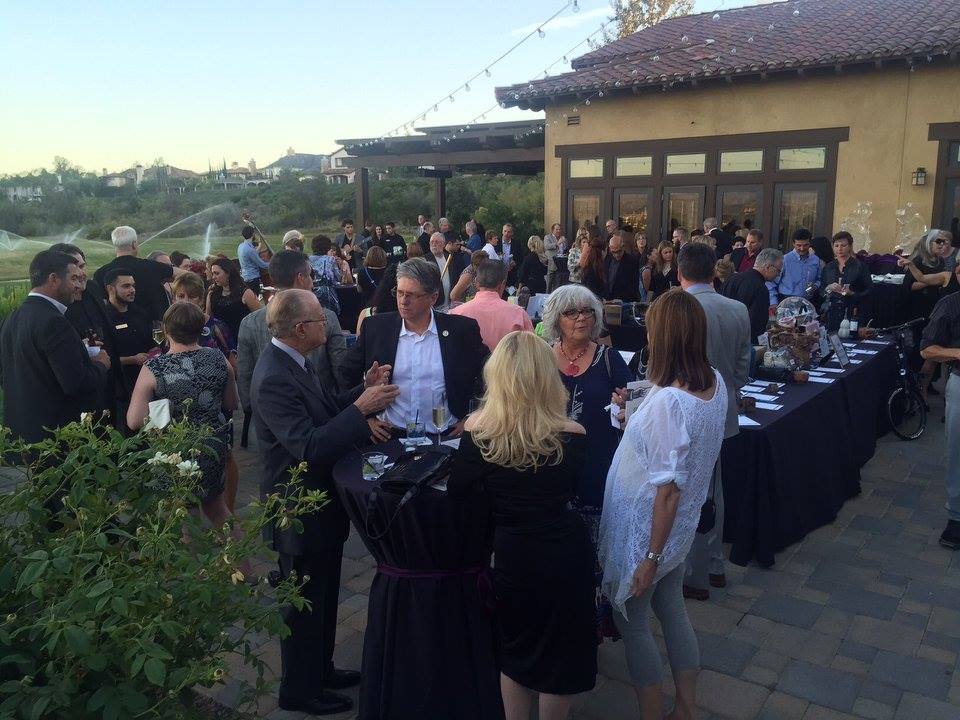 “The whole thing started nine years ago with Guy Lelarge (owner of Valencia Wine Company) and a glass of wine,” Dave Bossert, Co-Founder and Co-Chair said as he began as MC for the evening. “See the catalog for all the charities that will benefit from tonight’s live auction…take a glass of wine, have a big guzzle, and repeat before we begin. Think: Bid heavily and drink indiscriminately!”

Bossert showed his usual combination of showmanship and gratitude throughout the evening. Thanking his wife Nancy, daughters Marlee and Sydney, the volunteers for the event, service staff, chairs and sponsors (listed below).

TimBen Boydston, representing the Canyon Theatre Guild, has been a recipient since the art and wineGala began. “The Bosserts are wonderful people. When Dave and Guy had that drink it was a great day for the arts of Santa Clarita Valley! The art and  wineGala has made a real difference to our organization. Without great supporters the arts would not be flourishing. And this event is different from other events in the SCV because we not only get the best of SCV that love the arts, we get famous people as well.” (See the message from Dave Bossert below for a synopsis of the Disney royalty, and other dignitaries, that have been a part of this event.)

While dining on Executive Chef Peyton Poulsen’s exquisite fare (see menu below) guests meandered around the room to catch up with fellow supporters of the arts before the auction began.

Founding partner Greg McWilliams said, “From a very humble beginning the art and wineGala has grown into a premier fundraising event recognizing the arts in the Santa Clarita Valley, attracting wide-spread regional participation. The support of the arts is an absolutely critical component in enhancing the life of every community. I’m proud to be on the Board of Trustees of the Cal Arts Institute and a co-sponsor of this event.”

The auction got into full swing, with Bossert paving the way. He got the crowd whipped up into a frenzy when he announced that this year’s entertainment would be a “live painting” and those “seated in the splash zone” donned plastic rain gear. While Disney artist James Mulligan painted on a black canvas the crowd started snapping photos; when he threw Pixie Dust (glitter) over the painting at the end there was a collective audible gasp as Mickey Mouse was revealed. The crowd could not be calmed, another live painting was added to the auction – this one revealed itself to be Walt Disney himself.

I couldn’t have chosen better tablemates, Randy and Rose Marie Burzynski, owners of our local FastFrame on Valencia Blvd, commented “Support of the arts, literally, is good for us all. Custom framing and art go well together like a fine, long lasting marriage, as you can’t have one without the other – especially if you want to preserve it.”

Co-Chair, Disney animator and VP of Communications for Walt Disney, Howard Green, shared some of the highlights of his career, including meeting astronaut Buzz Aldrin when Aldrin had learned of a character that shared his name when Toy Story was in production. Later, it was Green that invited Aldrin to the art & wineGala. “My career has had a number of serendipitous moments.”

(The story in photos can be viewed here.)

The TPC/West Ranch Art & Wine Gala has raised over $750,000 in grants and scholarships in support of California Institute of the Arts, The Santa Clarita Ballet Company, Canyon Theatre Guild, The Master Chorale, COC PAC K-12 Arts Education Outreach Program, Art Gallery at COC and COC Division of Fine and Performing Arts as well as other programs throughout our community. California Institute of the Arts 501c3, a non-profit organization serves as fiscal sponsor.

A Message from Dave Bossert

The Santa Clarita Valley has always been an artistic hub. In fact, including the faculty, alumni and students of California Institute of the Arts (CalArts), along with our local residents, who are employed in all aspects of the entertainment industry, Santa Clarita Valley boasts one of the highest concentrations of artists per capita in the world! From the early days of the film industry, to the establishment of Disney’s Golden Oaks Ranch facility, to the founding of CalArts, to increased local filming, to the recently completed UCLA Film Archives, our community has been equally supportive of the arts through numerous local arts organizations and associations.

Over the past eight years, the TPC/West Ranch Art & Wine Gala has become the premier annual charity event supporting the arts in our community. Providing some of the finest food and entertainment, wines and art contributions from leading artists, many of whom have their roots right here in the Santa Clarita Valley, this gala has contributed more than three quarters of a million dollars to local arts organizations.

Each year, we try to bring the best of the arts to the TPC Oaks Grille for one spectacular night. In the past we have had honorary chairs Roy E. Disney, Astronaut Buzz Aldrin, Disney Legend Alice Davis, Roy P. Disney, composer and songwriter Richard Sherman, The Hayden Triplets, and many others. Some have spoken and others have performed, but all have delighted our guests. This year is no different. You will witness another, very different and amazing, artistic performance tonight.

We are proud that our annual TPC/West Ranch Art & Wine Gala is as pure a charity event as there can be. We are nearly all volunteer driven, which has allowed us to award grants and scholarships at the highest levels possible. It is our volunteers, the art and wine donations, along with your generosity, that has made this event such a success. Thank you for your continued support of the Santa Clarita Valley arts community!

Eve Bushman has been reading, writing, taking coursework and tasting wine for over 20 years.  She has obtained a Level Two Intermediate Certification from the Wine and Spirits Education Trust, has been the subject of a 60-minute Wine Immersion video, authored “Wine Etiquette for Everyone” and recently served as a judge for the Long Beach Grand Cru. You can email Eve@EveWine101.com to ask a question about wine or spirits that may be answered in a future column.

WASHINGTON (PRWEB) - Sippd has partnered with Skyy John of Tipsy Bartender, the … END_OF_DOCUMENT_TOKEN_TO_BE_REPLACED