…I know about 99% of the vendors and almost the same percentage of the guests as it’s a local event put on by one of my favorite non-profits: Assistance League Santa Clarita. There are two members that live on my street, and many more members and supporters in my neighborhood! 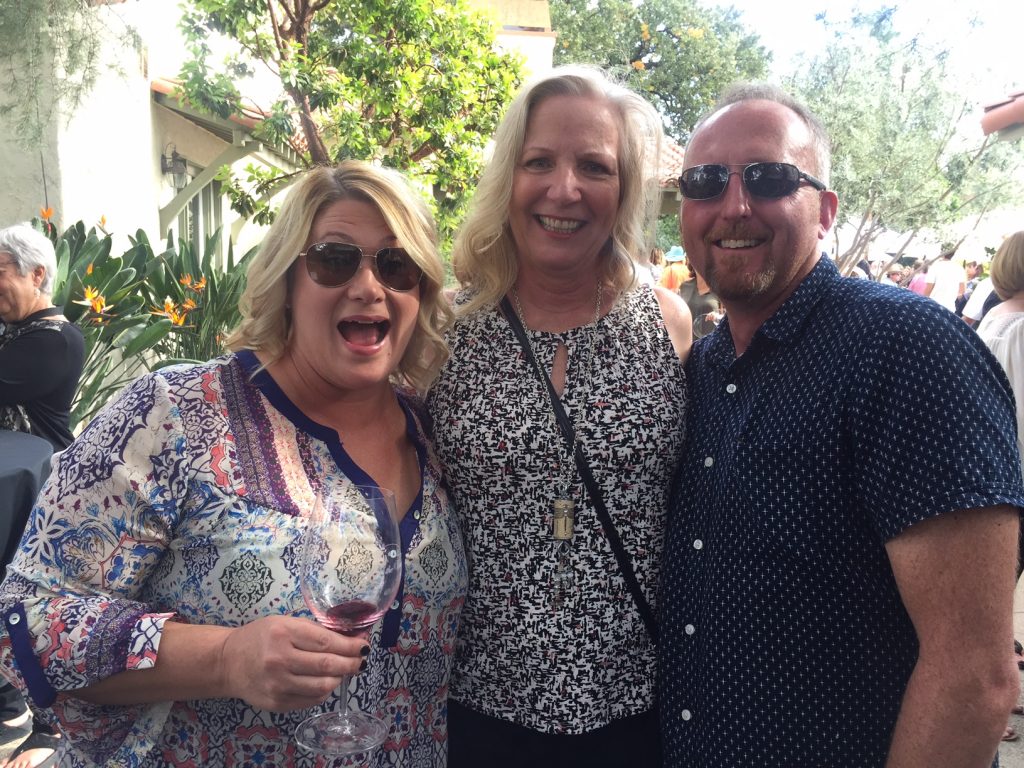 This was what I was quoted for saying about the event in a recent Magazine of Santa Clarita Magazine article:

Sunset in the Vineyard is the only event that represents the SCV Vintners and Growers Association. These are winemakers and grape growers that are based in the Santa Clarita Valley; often friends, assisting each other in harvest every year and tasting each other’s efforts along the way – from vine to bottle.

What also makes the event unique, besides being the first of its kind in our valley held in a private two-home winery estate, it is an opportunity for fledgling winemakers to learn more about the craft. Not all wine events have the winemaker available to attend – in this event I can only think of a couple of tables that may send an educated wine representative if the winemaker is unavailable. The point is, whoever is pouring you a sample has had a hand-on experience with that wine.

For me personally, it was a fine day many years ago when I discovered the vineyard at the Carpenters’ home. I learned that there were many home winemakers in our valley, working together, and thought how cool it would be to get some kind of way to visit them all in one day. I envisioned a tour bus. The Carpenters and their winemaking friends, dreamed of something much more long lasting. And, not to forget, to the benefit of the children of the Santa Clarita Valley served by the Assistance League.

If that’s not enough only Sunset in the Vineyard guests get a chance to taste the same grapes from the same vineyard – Bouquet Vineyard tended to by local winemaker Danny Mascari – but the only difference will be which artisan winemaker crafted the wine.

See the action, and some of my favorite wines of the day, in just two minutes here in this YouTube slide show.

The Vino and Brewsky

This year some of the delectable food was prepared by The Culinary Arts students and Instructors at College of the Canyon’s Institute for Culinary Education: grilled veggies, flatbread pizza, stuffed grape leaves, and more. Returning was local favorite DeRobertis Family Artisan Cheeses, wowing the crowd with their latest flavorful cow and goat cheeses, and the Speakeasy Bakery with several freshly baked breads and tapenade dipping sauce. New to the scene, and parked in the front driveway, was the vintage Sweet Beams Ice Cream truck. And the cookies…something the Assistance League is known for, several sweet volunteers worked the crowd armed with baskets full of delectable cookies.

Seen Amongst the Artisans

Assistance League Santa Clarita organized in 1989 by local women, was chartered in 1993 and has grown to 174 members and 51 Assisteens®.  A chapter of National Assistance League, it is a nonprofit, nonpolitical, nonsectarian and IRS 501(c)(3) service organization.  It is also a 100 percent volunteer-driven organization.  All funds raised from Sunset in the Vineyard benefit Assistance League programs exclusively in the Santa Clarita Valley such as Operation School Bell®, which clothed more than 2,500 children in the SCV this year.