The Los Angeles Epicurean Festival (www.laepicureanfestival.com) was held Sunday, August 26th, 2012 at The Vibiana in Downtown Los Angeles. Designed to showcase all things epicurean [food, wine and accessories], the event was held in three parts, with a trade portion from 10 AM to 2 PM, and then two public sessions – 3 PM to 6 PM and 7 PM to 10 PM.

The Festival did a great job in showcasing the various products, and the number of exhibitors was so huge that the Vibiana’s patio was used as well. Fortunately, there had been a slight [and brief] break in the Southern California Summer heat, and the weather on the patio was perfect.

I won’t bother listing all the exhibitors. I think Eve already did that and the website lists them as well. Highlights for me at the trade tasting were:

CHEFS (www.chefstandards.com) – Coalition for Humane and Ethical Farming Standards was giving out [not selling] delicious samples of humanely raised foie gras. (I plan to write more about this organization in the future.)

Exotic Meat Markets (www.exoticmeatmarkets.com) – First time for me to have llama and kangaroo sausages. Very tasty.

Kimmel Vineyards (www.kimmelvineyards.com) – Jim Kimmel laughed politely at my joke that he looks different on television [he’s heard that probably millions of time], then told me the story of how he and comedian and talk-show host Jimmy Kimmel became acquainted (and how Jimmy became his customer).  This small Mendocino winery was pouring samples of their Chardonnays, Merlot, and Cabernet Sauvignon, but the star was their hidden bottle of Cabernet Franc, which might have been my favorite wine that day.

Linda’s Gourmet Latkes (www.lindasgourmetlatkes.com) – What can I say? I like latkes. And these were great!

Southern Wine Group (www.southernwinegroup.com) – Jeff Miller was pouring a selection from Chilean winery Vina Tabali (my favorites were the Sauvignon Blanc, Syrah and Carmenere) as well as a Malbec from Argentinean winery Casa Marguery.

Stonehaus/Family Wine Partners (www.the-stonehaus.com) – It was great to taste the wines from Hearthstone and Caliza [two great Paso Robles wineries] as well as get an update on the soon-to-open Stonehaus coffeehouse and winery in Westlake Village.

Vinos Larroque (www.vinoslarroque.com) – Very tasty wines from Chile. I was especially fond of the Sauvignon Blanc and Chardonnay.

Volvic (www.volvic-na.com) – Thanks for keeping us all hydrated with your water and teas.

This was truly an outstanding event. I had the opportunity to try delicious new foods and wines in a beautiful setting. Everything seemed to run smoothly and I am looking forward to next year’s festival. 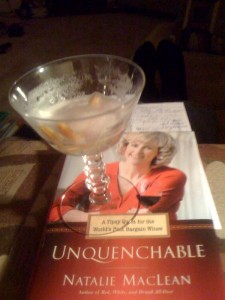 Haven’t done a “round-up” article in a long time. That’s where I ask pals on … END_OF_DOCUMENT_TOKEN_TO_BE_REPLACED