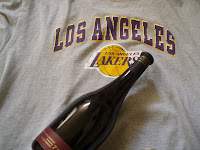 The [two?] people who regularly read my column know that I am a Zinfandel fanatic. I enjoy Zins from all over California [and even from Australia] and from many different wineries. But there are a few wineries that top my list, due to their combination of consistent high quality as well as producing a number of Zins from several different vineyards.

Turley is probably most famous in this regard. Turley’s cult following is practically legendary and they are well known for their amazing single-vineyard Zinfandel bottlings.

Carlisle, which I have already written about, is not as well known but every bit as fantastic in terms of consistent high quality single-vineyard Zinfandels.

Added to this list would be Robert Biale Vineyards.

I was first introduced to Biale a few years back by a friend who, knowing of my fondness for Zinfandel, brought a bottle of the Biale Black Chicken Zinfandel to a dinner we were having at Le Chene. The wine was fantastic and I had to find out more about this winery which I had heard of but had somehow escaped my attention. 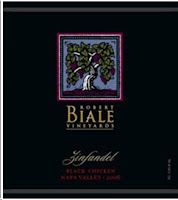 This is the explanation from this Napa winery’s website:

True story. In the 1940’s when Aldo Biale was a young man, he and his mother, Christina, operated in Napa what was essentially a relocated Italian farm. Walnuts, prunes, vegetables, fruit, white leghorn chickens and eggs, and of course, Zinfandel grapes that had been planted by Aldo’s late father, Pietro Biale, were the basic products emanating from the fields along El Centro Avenue. Out in the barn by the coops were hidden barrels of the homemade Zinfandel that Aldo had discovered was worth substantially more than grapes. Besides, Christina and the surrounding family enjoyed wine on a daily basis.

Orders for fresh eggs and produce regularly came in over the Biale’s party line telephone – the old multi-family shared system that was common out in the country in those days. So as not to have customers spill the beans to nosy neighbors that he had illicit Zinfandel for sale, Aldo instituted a code name for customers to use on the phone to protect his cover and order a jug of wine –“black chicken”. This discreet system for ordering eggs, produce and “black chickens” went on for decades.

Even Aldo’s newly arrived Italian spouse Clementina wasn’t sure why customers wanted black chickens. “You want the white ones – they are better,” the English-learner advised in her best phone sales pitch. “Just tell Aldo,” came the regulars’ replies…

Black Chicken went legit’ in 1999 when we bottled our first one from the vines out by the coops behind Aldo and Clementina’s home.

Well, I soon discovered that Biale produces a host of great Zinfandels, along with Petite Sirah, Barbera, Sangiovese, and a very limited Sauvignon Blanc called Pollo Bianco [get it?] as well as Syrah under their Hill Climber label. I’ve been hooked ever since.

I need to switch gears for a moment. We all know that occasionally a bottle of wine is flawed. Things happen. I won’t begin to try to explain what a corked wine is; if you want to read about it, please go back and read Rusty’s excellent article on this subject. There can be reasons other than being corked. Sometime, the wine may be just going through a “dumb” stage. Or maybe it was subjected to unusual conditions during shipping. There can be other reasons as well. My palate is not necessarily as sophisticated as someone like Rusty, so I cannot always identify why a bottle is “off”. But, it does sometimes happen and the more wine one drinks the more likely one is to encounter an off bottle. When I do, I will often try to contact the winery and ask for input.

In this particular situation, we had opened a bottle of the 2005 Robert Biale Zinfandel from the Stagecoach Vineyard. This is usually a terrific wine, with a wonderful nose and great flavors. But this time – nothing. It didn’t taste bad; just no taste and no aroma.

So, I shot an email off to Jayme Silva at Biale to ask his take on the matter.

He was very surprised, as he had heard no negative comments about the wine and felt that the 2005 wines should be drinking pretty terrifically. I can attest to this, as we have had several of the Biale 2005 bottlings before and since and found them all excellent. Just this one time was there a question.

Under no obligation to do so, Jayme sent me a 2007 Robert Biale Stagecoach at no charge to replace the bottle that had disappointed me. I had not expected him to do this, but was very happy to accept his offer, which proved to me that not only do they make great wines but really care to keep their customer relationships on track.

By the way, I asked Jayme for his comments on this article, and this was response:

“We like it. The best part is the pure baloney about how I’m such a thoughtful and considerate person. If I did something nice for you, it was completely by accident.”

As an unfortunately sad follow-up to my article about Robert Biale Vineyards, I got the following email yesterday from Jayme Silva at Biale. He has granted permission to post it on your blog.

R.I.P. Aldo Biale
80 year old patriarch dies
NAPA, CA We are so sorry to have to tell you that Aldo Biale, Robert’s father and co-owner of the winery, passed away quietly at home on Saturday. You probably know that he had been fighting health problems for some time.

Many of you knew Aldo. He was a born Zinfandel grower, patriarch of the Biale family vineyards on El Centro Avenue in Napa, and partner in Robert Biale Vineyards, Aldo’s life was devoted to his family, his Catholic faith and growing grapes that produce two of the market’s most highly regarded Zinfandels – Black Chicken and Aldo’s Vineyard.

In 1991, Aldo realized a long held dream of making high quality wines. Along with his oldest son, Robert, marketer Dave Pramuk, and winemaker Al Perry, he created Robert Biale Vineyards, regarded as one of the finest producers of Zinfandel in California, and one for which there is an extremely loyal following. He invited everyone to be a part of his family.

You know that we are so sorry to lose him. We wanted to let you know just as soon as arrangements could be made.

You are welcome to join us later this week.

In addition to his winery family, Aldo leaves his spouse of 56 years, Clementina, his daughter Sandra, his sons Robert and Mark, sons- and daughters-in law, and grandchildren.

Clementina has asked that donations be made in Aldo’s memory to the following organizations:

ACCOMMODATIONS: Neighbors and friends of Aldo have offered their services to anyone who is planning to visit from out of town.

THE UNIVERSAL WHISKY EXPERIENCE PRESENTS TO YOU: The World’s Premier Luxury … END_OF_DOCUMENT_TOKEN_TO_BE_REPLACED