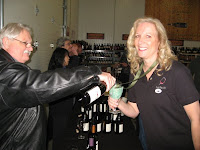 Bacchus know what I do and why. I do it for him…the love of my wine giving God. But, if I can add a charity into the mix, well, there’s no living with me. Fills up my little soul.

Whether it’s a local group or an international one, I somehow have developed this rep of “can’t say no”…and I’m always happy to play a role in someone else’s big show.

Two years ago I tried my first large wine event in my home for my church. Google me to find the articles on that. I lived and breathed that event for months, and took several church volunteers with me.

Then there was a Bra for this and a Walk for that. Greeting and opening doors for women more Honorable than me and Sunsets in Vineyards…

Then Haiti happened. I got emailed updates from my friends at Three Angels Children’s Relief and just gaped at them. But, two, or three days later, while I was filling my addiction for Facebook a little chat opened up on the bottom of the page from my winemaker friend Roman Weiser.

Then I got a Facebook e-mail from Roman telling me he could get the Santa Clarita Valley Vintners and Growers to donate wine and pour and I should call David Schutz of All Corked Up (ACU) to talk details. David would give us his venue for the fundraiser.

I called that night, settled on Three Angels Children’s Relief Haiti as I had met and interviewed Shannon Hoffman in 2007, one of the local 3 Angels, and felt that their immediate needs had made the local press and would be more relevant to most than the Red Cross. These were local people helping other local people with a global disaster.

By the next day I was doing my thing while Roman and David were doing theirs. And as they don’t have a blog to tell you all that they did (I know via e-mails…that have clogged our collective systems) that they were organizing something of great magnitude…in ONE week’s time.

I wrote the press release, placed it on various online sites, my own site and sent to local newspapers. I mailed out information via my weekly Dear Wine Friend newsletter and then…went back to Facebook. I created the event and invited Eve Wine 101 members.

Back on Facebook I started taking advantage of Roman’s initial mode of contact: “chat”. But, instead of live chatting all of the time, I’d stealthily check who was on “chat” and leave a nice message like ARE YOU COMING TO SUPPORT US OR ARE YOU AFRAID OF A LITTLE RAIN on their walls.

They’d see my message…and my profile picture…and their friends would too… I was getting even more driven.

Rose doesn’t drink during the week, I told her to skip Sunday. Double E was my “date”, she’d help with the raffle. Double R doesn’t go out at night…well she still doesn’t so she owes me!

So, the night of the event comes. No rain. I run around a lot, literally, holding my Sue Tatosian wine glass holder away from my chest so I don’t loose a drop of wine. I don’t want anyone to wait too long in line so I’m giving out wineglasses in trade for cash. I get to meet all of the wonderful people at ACU, hug the winemakers between pours, thank volunteers for pouring or selling raffle tickets and finally realize…wowza….all of the Facebook friends and friends of friends!

And even though we didn’t charge much ($15 per person!) our 3 Angels took home thousands to help a little with the thousand of Haitian orphans. And you want to know what I do? I’m living! OHMIGOD…can you believe I almost forgot to mention the wine:

(Michael Perlis, Eve’s Wine 101 staff writer, also attended the event and spent time as a volunteer. He surprised me by pulling wine out of his own storage at ACU to pour for the guests that night. Read his post that ran this past Saturday 1/23/10)