I met Bill Tocantins, the CEO of Elixir G Ginger Mix, when he was pouring samples of cocktails at the Cooking For Love fundraiser recently.  My husband and I are big fans of ginger flavoring in cocktails as not only do we enjoy the bite of ginger against sugar, it’s also a natural stomach healer, thereby making it a great choice before, or after, a meal.

Bill’s mix, in a deep chocolately brown color as it’s as natural as you can get (see news below today’s recipe for more) was quite pleasant.  And, later, when he sent me a sample, I learned how variable ginger mix can be.

There are many cocktail recipes that can be adapted around Elixir G ginger cocktail mix.  For the next few Wednesdays I will run a sampling of only the ones I have made myself, and that have passed my taste test: 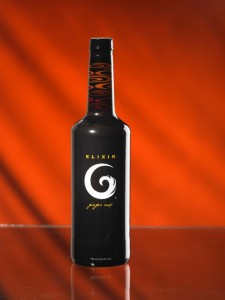 My Vodka Martini with Elixir G

Two lemon peels around the rim and drop in the glass

The restaurant world was dazzled when they were suddenly able to easily offer Ginger Margaritas, Ginger Martinis, Ginger Mojitos and more.  The powerful Elixir G ginger concentrate is made with an enormous amount of fresh ginger root.  Many more restaurants followed ranging from The Four Seasons to independent mom-and-pop locations as far away as New York, Ohio and Louisiana.

Based in Los Angeles, Elixir G was started by Bill Tocantins. He sources the best ginger root in the world including Thailand, India and Brazil.   After testing, it is flown in and then bottled in Riverside, CA.   It is made with fresh ginger root, lemon juice and pure cane sugar.  No preservatives, chemicals or dyes are added.  Shelf life is over one year after it is opened.

The KFWE is the destination for wine and food lovers alike, affording … END_OF_DOCUMENT_TOKEN_TO_BE_REPLACED