Diners need only browse the local farmers markets, fishmongers and meat purveyors for an idea of what Richards’s bowl might feature. 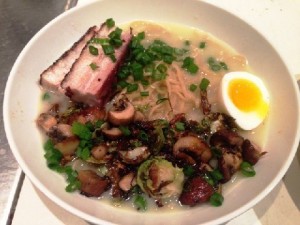 Seating on a first come, first served basis. No reservations. 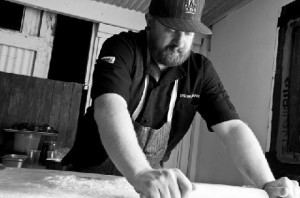 Growing up in Hemet, California, Weston might have caught the “cooking bug” from his best friend’s dad, who was a professional chef. He began his training at the California School of Culinary Arts in Pasadena. One Le Cordon Bleu Diploma, an AOS in Culinary Arts and several other hospitality certifications later, Richards returned to Santa Barbara and secured a job at Sage and Onion as a line cook. In August 2008 he was hired as Sous Chef at Santa Barbara’s Julienne. Their in-depth, in-house program was the perfect environment for him to refine his technique, moving Weston quickly on the journey that finally led to what he now creates in the kitchen at Les Marchands: Rilletes, house-made pates, and fresh Andouille and chorizo sausages.

Recently awarded the “Wine Bar of the Year” by Imbibe, and one of the 21 Best Wine Bars in the country by Thrillist, Les Marchands Wine Bar & Merchant is led by Master Sommelier Brian McClintic who wanted to create a fresh and dynamic vision for retail, dining, and education in an approachable and unpretentious way.   Translated as ‘the merchants’ or ‘the shopkeepers,’ McClintic creates an environment where intimate product knowledge meets personalized service.  This philosophy is lived out nightly in the wine bar but is integral to every phase of their business from private cellar consultation to custom education classes to the wildly popular Les Marchands’s wine clubs.  The great wine merchants Brian has admired over the years distinguish him by seeking out quality-conscious producers.  The import selections are Eurocentric, representing the most relevant producers in France, Italy, Austria, Germany, and beyond.  On the domestic side, the focus relies heavily on local Santa Barbara County producers who are shaping and redefining the region.

Les Marchands’s commitment to sourcing out the finest products starts in the cellar and spills over into the kitchen where Chef Weston Richard’s quality meets execution and the simplest dishes on their menu aspire to greatness. Share some mainstays from their cheese and housemade charcuterie program or dive in to jamon Serrano toast with Romesco sauce or green beans with Spanish anchovy, aioli and roasted almonds. Guests can drop in and enjoy seasonal offerings prepared by Chef Weston Richards including local Hope Ranch smoked mussels, pork rillettes, and local farmers market pickled vegetables.  Stay up to date on special events and offerings by joining their mailing list, including five nights of Chef Richard’s special suppers.

McClintic brings 16 years of hospitality experience with him to Les Marchands Wine Bar & Merchant, a career spanning the major restaurant hubs of Los Angeles, Aspen, San Francisco, and now Santa Barbara. McClintic was one of four subjects starring in the acclaimed documentary SOMM, which chronicled his journey to the elusive Master Sommelier title, becoming the 107th individual in the U.S. to attain this honor. SOMM, distributed by Samuel Goldwyn Films, opened in 2013, receiving rave reviews by the public and film critics.  In addition to Les Marchands, Brian has teamed up on a Santa Barbara wine project called Vallin, along with local winemaker Justin Willett, Eric Railsback and fellow Master Sommelier Dustin Wilson. In the inaugural year of Les Marchands, McClintic was been named as “The Wine Guy to Hire” by Departures magazine and among the “40 Under 40 Tastemakers” by Wine Enthusiast in 2014.

Love reviewing bubbly, and this time it was a Piper Sonoma Brut NV from Sonoma! … END_OF_DOCUMENT_TOKEN_TO_BE_REPLACED