On May 14, 2015, Sutter Home’s rock-star panel of judges were won over with the flavorful Heart & Seoul of Korea Burger topped with a peanut basil slaw and gochujang mayonnaise.

Laura Werlin, Build a Better Burger Emcee, noted after sampling the burger during judging, “Now THIS, I want to order in a restaurant.”  The judges agreed. 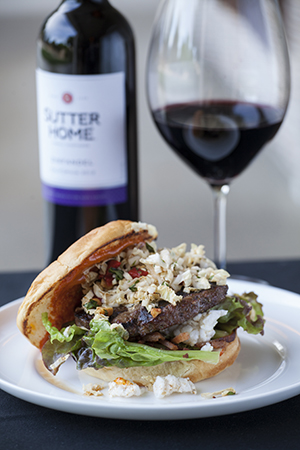 Cristen Clark commented on the unusual ingredient, “Who would have thought Spam would be good in a burger – but just the right amount of texture and salt to complete the burger.  It paired perfectly with the deep dark Sutter Home Zinfandel.” Chef Rusty Hamlin from Louisiana was a fan of the spice, noting, “Of all the burgers this one had the most flavor – goes straight to my roots of liking that heat! The flavor lingered until the next burger came out.” Tracy Benjamin said she “loved the crunch of the peanuts.” Celebrity Chef Eric Greenspan tasted the Heart & Seoul of Korea burger, which was next to last, and noted, “The next burger better be dope – or we have a winner.”  He was right.

“It was fun creating this recipe, and I am thrilled that the judges enjoyed my burger creation,” noted Grand Prize Winner, Harrison Wheeler, “I love wine, and I am a self-proclaimed foodie, so it was an honor to have the opportunity to compete in Sutter Home’s recipe contest.”

The panel of judges named the Whistler Village Poutine Burger from Ann Elkina of Farmington Hills, Michigan as the Runner-Up Burger and $15,000 prize winner. Werlin called it “Onion Soup Fondue in Burger Form.” Greenspan commented, “I really tasted the meat.  This one stayed true to ‘I’m just a burger.” Judge Dr. Sharon Ufberg, added, “I liked the pairing with the Sutter Home Chardonnay – It was perfect and I didn’t expect it.”

After hearing the good news, Elkina exclaimed, “I am so excited to be a Build a Better Burger winner! I love to cook, and I am so grateful that my passion for food and great flavors was apparent to the judges.” When asked how she was going to spend the $15,000 prize, Elkin noted “I love to travel, so I plan on taking a trip to Spain!”

Leading up to the cook-off, Sutter Home consumers and burger fans across the nation voted for their favorite burger and named the Chorizo Beef burger submitted by Pricilla Yee of Concord, California, this year’s $10,000 People’s Choice Winner. Chef Rusty, again the spice fan said, “Who doesn’t love Chorizo with that Southwest kick in it?” Clark noted, “The combination of the orange and the burger made the wine pop.” Upon hearing the great news, Yee commented, “I am extremely humbled and thankful.”

The 2014 Sutter Home Build a Better Burger® Recipe Contest winners were selected by this year’s panel of judges, including:

This year’s panel of judges was moderated by Laura Werlin, one of the country’s foremost authorities on cheese. She is the award-winning author of six books on the subject, is a sought-after speaker and spokesperson for consumer and trade organizations, and is a frequent television and radio guest.

Wendy Nyberg, vice president of marketing for Sutter Home, added “The judges were amazing this year.  Including celebrity chefs, bloggers and a pork farmer, they really know what makes a great burger. We were honored to have Laura Werlin as our Emcee.  As the author of James Beard Award-winning, “The All American Cheese and Wine Book,” she is not only a cheese expert but a wine expert – and that is really why we are all here.”

With the close of the 2014 contest, casual cooks around the nation have the opportunity to enter the 2015 Sutter Home Build a Better Burger® Recipe Contest, which opened on March 30th, 2015 and will run through September 8th, 2015. Prizes for the 2015 contest includes a $25,000 grand prize, $5,000 for the winner of the People’s Choice Award and $1,000 towards the purchase of Weber products. Consumers can also participate in a Build a Better Burger® text-to-win sweepstakes for the chance to win $25 grocery gift cards. Visit www.sutterhome.com for more information.

Celebrating its 25th anniversary this year, the Sutter Home Build a Better Burger® Recipe Contest has invited cooks from around the country to submit their original creative, flavorful burger recipes for a chance to win. The 2015 recipe contest is now open for submissions. Recipes can be entered at www.sutterhome.com.

Over the years, the popular recipe contest has collected thousands of mouth-watering burger recipes, allowing Sutter Home to create the BurgerBase®, the world’s largest collection of burger recipes. The BurgerBase® also serves as inspiration for contestants, as judges look for original and inspired recipes that are packed with flavor.

In 1990, Sutter Home uncorked the wine industry’s first major recipe contest: Sutter Home Build a Better Burger® Recipe Contest. By pairing one of America’s favorite wines with America’s favorite food—the burger—Sutter Home helps to demystify the challenge of pairing wine with food and encourages everyday cooks to create their own recipes and pairings. Since then, Sutter Home has awarded more than $1.3MM in prizes to home cooks across the U.S.

Sponsors of the 2015 Sutter Home Build a Better Burger® Recipe Contest, include Dole, PopChips, KC Masterpiece, Alexia, and The Pork Board, KitchenAid and Weber-Stephen Products LLC.

When the Trinchero family bought the Sutter Home Winery in 1948, they had a vision, a passion, and an insight into consumer tastes. In the early 1970s, Sutter Home started a trend when the company created White Zinfandel, introducing a new, sweeter flavor profile and changed the way Americans enjoyed wine by offering high-quality varietals at an affordable price. By the 1980s and 1990s, Sutter Home became a household name and the second largest independent family-run winery in the United States. In 2005, the winery was the first to produce the groundbreaking single-serve, 187ml in light-weight plastic bottles, and was one of the first wineries to produce Moscato over 60 years ago. For more information visit www.SutterHome.com.