2012 HALL Kathryn Hall Cabernet Sauvignon Release party invite included this teaser: …check out all of the activities we have in addition to enjoying fabulous wine and Texas BBQ prepared for the day. Enjoy music from Twang Ditty, hayride through the Bergfeld vineyard, and purchase a bottle to have it signed by Kathryn Hall! 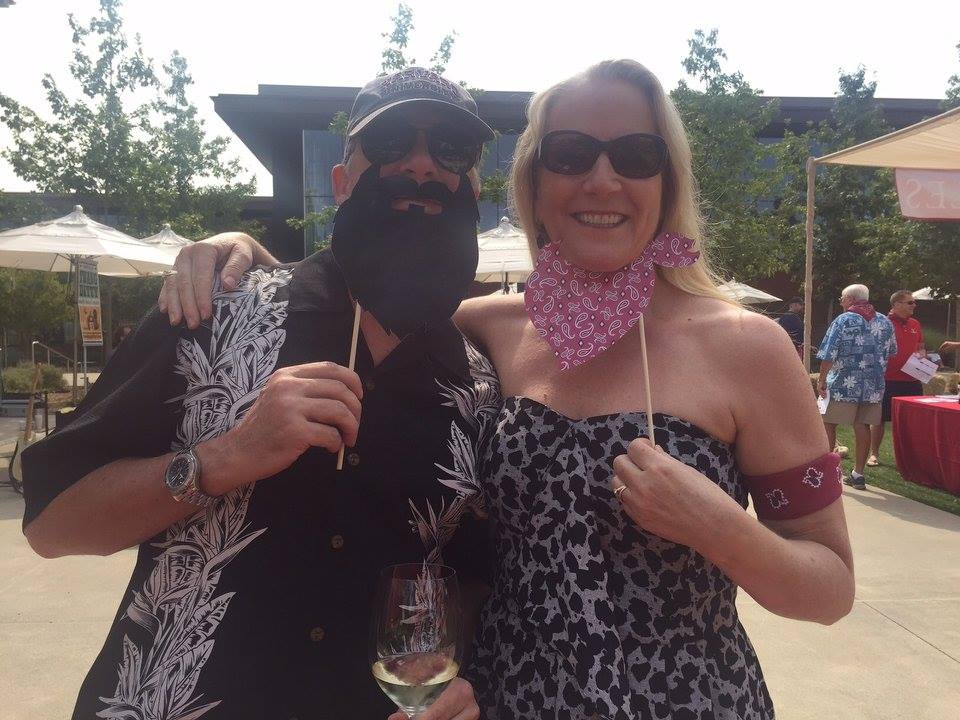 At the “Selfie Station” at HALL Wines!

At the Kathryn Hall 2012 release party guests were treated to more than the 97-point Robert Parker reviewed wine. Before the 2012 wine was unveiled at noon we had sampled a Sauvignon Blanc, two Cabs and an extremely lush Pinot Noir (my favorite).

We enjoyed meandering the great lawn while the misters kept us cool, and we could linger as much as we liked and re-visit any wine we liked.

Guests took advantage of other ample offerings as well: a choice of seating, live music, dancing, a selfie-station, a long and imaginative buffet, tray-passed desserts and plenty of like-minded friendly guests. (See photos here.) There were rumors of hayrides and grape stomping but we were too happy in the lounge seating to get up to do much of anything else. Chatting, nibbling and tasting was plenty of entertainment for us.

When Kathryn Hall took the stage we did rise to the occasion. She gave a lovely speech about the vintage and how pleased she was with how well it was received. I made a short 27-second video of it too. Then, we got back to our own revelry. (The album for my entire 3-day trip can be viewed here.)

The last hour or so for us was spent drinking water and relaxing. Later, when the event closed after 3 fun-filled hours, we slipped into air-conditioned shuttles to take us back to our cars…and what I would expect: hotels for much-needed nap times.

NAPA VALLEY, CA – (excerpted from press release) “2012 is one of the most exciting vintages this Valley has seen in a decade,” says vintner, Kathryn Walt Hall. “We are thrilled with how Steve and his winemaking team have consistently crafted this wine each year, maximizing each vintage to produce the best possible result. This is truly the best fruit Napa has to offer.”

In addition to the main event, a rare Vertical Tasting hosted by Steve Leveque was presented in the historic Bergfeld building. The experience included a tasting flight of Kathryn Hall Cabernet Sauvignon (vintages 2007 – 2012).

HALL produces critically acclaimed artisan Napa Valley Cabernet Sauvignon, available to taste and buy at two tasting room and winery locations in Napa Valley. Owned by Craig and Kathryn Walt Hall, its vineyard collection features five Certified Organic estates producing classic Bordeaux varietals. Each vintage, Director of Winemaking Steve Leveque crafts 16 distinct Cabernet Sauvignon wines which demonstrate the unique characteristics and diversity of Napa Valley. HALL’s highly rated wines include the 2008 “Kathryn Hall” Cabernet Sauvignon that earned #2 of the “Top 100” Wines in Wine Spectator and its 2010 ‘Exzellenz’ was awarded 100 points by Robert Parker, Wine Advocate. Since the first vintage in 2002, over 85 HALL wines have been rated 94 points and above. HALL employs high-density plantings and small vine viticulture combined with two cutting-edge, gravity-flow wineries to produce the highest quality wines. In addition, the HALL St. Helena winery was the first LEED® Gold Certified Winery in the State of California in 2009 and earned another LEED® Gold certification for its high tech production facility and modern tasting room in 2014, making HALL pioneers in the use of green buildings for the wine industry. Each of HALL’s state-of-the-art winemaking facilities and tasting rooms combine modern art and architecture matched with spectacular settings. For more information, please visit www.hallwines.com, @hallwines, or by calling 707.967.2626