Wine friend, on Facebook and off, Diane Ghilardi, asked me if I was free to come to Leona Valley Winery on 8/14.  (See her story below mine today.) Remarkably I was free, I had not been there before, and they were having a party.  A “pick-up” party invariable means, for the true wine 101ers reading this, a way to get wine club members to the winery to pick up their shipments.  It’s not done to save UPS fees, to my knowledge, but serves to get the members there, taste and celebrate the newest releases. 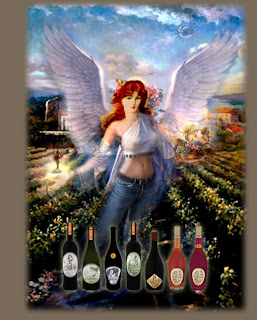 The last time I made the drive to Leona Valley, about an hour’s drive up Bouquet Canyon past Saugus, my husband wanted me to see where he would like to retire.  I was home that day because I was sick, he thought it a great way to spend the day…men.

The view hasn’t changed.  A curvy drive past landmarks like Lombardi Ranch and the Big Oaks Lodge gives way to small homes tucked off the road that are only accessed by tree-hidden bridges.  I had a Michael Buble CD in, as there was no radio reception, and kept both hands on the wheel.

I let one car pass me on my way, a steel-gray Mini Cooper that, as I presumed was headed to the same place, I gave a wave too.  When I arrived at Leona Valley I tucked my car in right next to theirs in the dirt parking lot.

That’s when I spied Ron and Kym Cappi, the latter famous on my blog for creating a cool dog bed for Leona Valley’s “Jersey”, coming out of the Mini Cooper.  We said our hellos and joined the crowd. 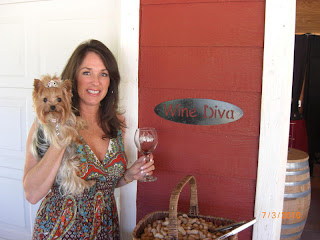 I quickly found Jim and Diane Ghilardi.  Diane introduced me the Reynolds couple that own the winery, and her friends Trisha Teagle, “Robbie” (a man that Diane had somehow babysat for) and Cassie Boyle.  Other locals I saw were Tim and Jenny Ketchepaw (“We joined for the parties!”) and John Klymshyn (You got my name right this time!”)

Diane then showed me where to check in and get the 7 golden coins to use for tastes.  I tried their Chardonnay (nice!), Pinot Noir, Cabernet Sauvignon (2), Malbec (liked that!), Meritage (the best of the day!) and a Shiraz.

The staff made a great Paella with seafood and sausage as well as vegetarian and meat pizzas.  A cheese platter, strawberries and bottled water rounded out the tasting.

Guests sat on benches at large tables while gabbing about the wines.  Diane’s group were discussing different Paso Robles favorites and I found a seat with the Cappis.

Kym was into wine before Ron, but he soon surpassed her on his quest for knowledge.  Trips to Napa, Santa Ynez, and Paso Robles are yearly for them, in fact they will be in Napa for their wedding anniversary in about 5 weeks, this time with a limo’ed driver.

When it was time for me to head out, my second water bottle of the day in my hand, I said my goodbyes.  A family was playing croquet on the front lawn, a horse was rolling on his back as if to scratch an impossible-to-reach spot, and the driver’s of the mini cooper – hot on my trail again. 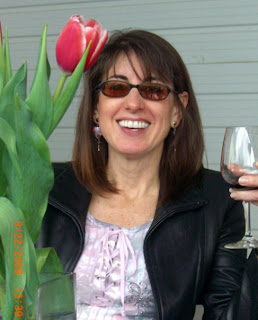 Although I have only been twice now, the one thing I commonly hear fromeveryone I talk to about Leona Valley Vineyards is how laid back andfriendly everyone is. It is much like the smaller, friendly Pasowineries in that aspect. Their October grape stomp party looks fun,with a renaissance style festival of food, music, wine, a grapestomp, and an old world archery competition (right up my husband Jim’s alley).Period attire is encouraged.

Also, as a club member, one oftheir perks is, “mi casa es su casa.” It says on my paperwork, “Thenext time you have guests visiting, bring them to see “your” vineyardand enjoy a fresh made pizza while tasting wine in “your” tasting room.Plus you get an extra 20% off any case purchase from the tasting room.”

The consensus was the Malbec and the Meritage were thefavorites today, but I also likes the Leona Valley cab, (not the Fault Line).The Fault Line is their budget label. I have some of the Fault Line Syrah and the Cab to make a good Sangria for an off-road weekend in thedesert (after the driving). I got the recipe from them when we went tothe Fault Line party a few months ago.

Alella, a small wine district in the north eastern part of Spain centers around … END_OF_DOCUMENT_TOKEN_TO_BE_REPLACED