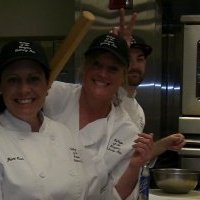 Liz attended the College of the Canyons Culinary program, where DiMaggio Washington was one of her instructors.

Soon after DiMaggio Washington came to All Corked Up, he hired Liz Pack to be the chef.

In June, my esteemed editor Eve Bushman interviewed Liz for the West Ranch Beacon column.  You can read that article here:

Now that The Cellar has been in operation for awhile, I thought it was time to get at an update on what Liz has been up to. I was really interested in hearing what changes Liz has seen and what she expected to happen going forward.

One of the things Liz is justifiably proud of is the menu upgrade. It seems like all of our old favorites are still there [such as the meatballs, panini, empanadas, etc.], but there are also now complete dinners on the weekends.

And Liz definitely has the cooking chops to prepare these meals. For example…

Most people who know me know that I am not a fish eater [hey, not many Zinfandels go with fish], but one recent night I felt guilty and ordered the special of nut-crusted Chilean sea bass. It was one of the best seafood meals I had ever eaten, and the crust on the fish made it not only more delicious but added to the texture and helped to enable it to stand up to whatever monstrous wine I had picked for the evening.

All in all, many of the changes have been subtle, but they are clearly happening, as the menu at The Cellar transitions from having just a bar menu to also offering full gourmet meals.  Liz says customer feedback has been positive and she is looking forward to bringing things to an even higher level, with additional focus on presentation as well as elegant preparations such as osso buco.

Liz also wants to focus more on wine and food pairings, and hopefully some winemaker dinners are in our future. Liz is passionate about cooking and one of her greatest joys is making people happy with the food she prepares, whether at The Cellar or her own catering company, Divine Catering.  She’d love your feedback.

LOVINGSTON, Va./PRNewswire/ -- Virginia Distillery Company and members of the … END_OF_DOCUMENT_TOKEN_TO_BE_REPLACED