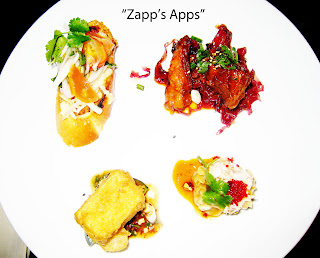 As you may recall, Don and I are perennial students in Santa Clarita’s own Dining with the Chefs class.  Our February meeting took place at Zapp Simply Asian restaurant in Valencia.  This storefront establishment is in a mini-mall at the corner of Valencia Blvd. and Cinema Dr.  It is rather unassuming on the outside, but stylish and sophisticated on the inside.  The striking, but minimalist decor, features as a focal point a mural with the word “delicious” translated into 20+ languages.  (Zapp Simply Asian does not have a website, but you can take a video tour by looking it up on You Tube.) 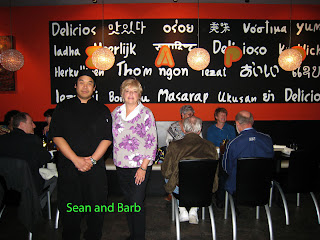 The class was called to order by instructor Barbara Okronick.  This is one class that quickly comes to attention, because we are all eager to get started with the lesson!  The restaurant owner, Sean, was introduced, who later confided that his real name is Chate.  (We met Pam, the chef, at the close of class.)  Sean stated that Zapp Asian had been open for 3 months and that he was trained in the culinary arts at Cal State L.A. a decade ago.  He explained that his goal was to bring something different to the SCV in the form of Asian Fusion cuisine.

As the dishes were cordially served, there was no doubt that Zapp Asian was realizing its goal.  The tasting menu for the class consisted of 4 appetizers, a soup, 8 main dishes, and Penang Panna Cotta for dessert.  As is often the case, class members quickly began to ask for “homework boxes”.  No problem–each leftover was individually boxed and bagged by the server and delivered back to the table in record time.  And I suspect that table companions actively vied for the leftovers, because the food at Zapp Asian is good enough to eat again and again!

The delectable dishes at Zapp Asian are unique spin-offs of traditional dishes found on Thai, Chinese, Japanese, Vietnamese, and even Italian menus.  Zapp’s culinary creativity was demonstrated in my favorite appetizer, the Bangkok Bruschetta:  pan-seared savory minced chicken on a sliced baguette, topped with Havarti and Monterey Jack cheese, tomatoes, sweet basil, and shallots in a tangy orange sauce.  When Don and I returned to Zapp later in the month with our extended family in tow, the Tuna Inferno became my new favorite appetizer:  a mixture of ahi tuna, house special chili powder, shallots, cilantro, and scallions served on crunchy won ton skins.  But don’t let the name dissuade you; all menu items at Zapp can be spiced up or down according to one’s preference.  What’s more, our 11-year-old grandson, a Pad Thai aficionado, proclaimed Zapp’s version to be perhaps the best in the SCV!

Currently, Zapp Simply Asian does not serve beer or wine.  However, Eve’s wine friends should not be deterred, as the restaurant is quite wine-and-beer-friendly.  Diners can bring their own wine, and there is no corkage fee.  On class night, we brought a bottle of Pacific Rim Dry Riesling (World Market, $10) that paired favorable with the exotic Asian Fusion flavors.  On family night, we were directed by our server to go to the liquor store a few doors down to purchase Thai or Japanese beer.  Don, the obedient person that he is, went to the liquor store and returned a few minutes later with 2 cold cans of Sapporo.  As soon as she saw him return, the server brought out 2 frosty glasses for us.

Our March meeting of Dining with the Chefs will be at Tandoori Grill, an old favorite.  At that time, dates and restaurants for the next “quarter” will be announced.  Prospective students can contact Barbara Okronick by e-mail at DiningWithBarb@gmail.com.  There are no prerequisites for the course other than a desire for dining adventure and a healthy appetite!

VERONA, ITALY (PRWEB) - The CourseJuly 2022 marked an exciting foray into the UK … END_OF_DOCUMENT_TOKEN_TO_BE_REPLACED