You may remember that I had a Russian and Polish vodka tasting with a few friends last month.  As it was MY house, and I bought the vodka, I got something I’d never heard of: VODKA LEFTOVERS.

And, since my kitchen remodel isn’t done yet, this week’s installment of “Chef 101 Humpday Recipe” is…Bison Grass Vodka Martinis.

The ancient Bison poop on the ancient grass – and apparently that makes it special?  (And there is that one green/gray blade in the bottle to prove it.)  Whatever.  It wasn’t a favorite of mine at the tasting, but, as I was raised by a thrifty woman, it was destined to be used in another recipe.

On an Internet search for Bison Grass Martini everyone wanted me to shake it with, get this, apple juice.  I think I mentioned that in the post about the tasting, so I won’t bore you with how grossed out that made me. 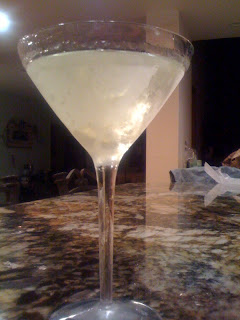 one half jigger vermouth

And this is what we got: Floral bouquet, but an overwhelming almond on nose and in taste, anise, an oiliness on the palate and NO GRASS AT ALL.  And the true test? It GREW on Eddie.