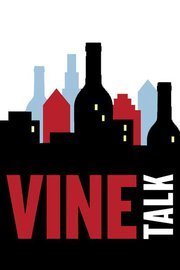 VINE TALK is a wonderful TV show that you may not have heard of until now. So, please allow me to tell you what you’ve been missing.

Filmed in New York at Lincoln Center, Vine Talk is hosted by Stanley Tucci. Assisted by two wine experts [Ray Isle, Food & Wine magazine’s Executive Wine Editor, and a second expert from a rotating group]. Mr. Tucci plays host to a group of celebrity guests [which changes weekly], as they sit around a table and taste and evaluate wine over good food and even better conversation. Celebrity guests have included.
Nora Ephron
John Lithgow
Nathan Lane
and Jennifer Coolidge

…as well as Celebrity chefs such as:
Jonathan Waxman
Alfred Portale
and Lidia Bastianich

Each week, a different wine region and varietal is explored. Some recent episodes have focused on Napa Cabernets, New York Rieslings, Argentinian Malbecs, and Paso Robles Zinfandels [which, not surprisingly, was of particular interest to Yours Truly].

The wine experts lend their wine knowledge to the show, but care is taken to keep things entertaining, while this knowledge is passed along to the audience. And the comments of the celebrities are always enlightening, whether or not they have significant wine knowledge. In fact, the wine novices often provide the most interesting comments, as their experiences aren’t clouded by any of the official buzzwords of winetasting. And, in certain cases [such as the episode with Nathan Lane], things turn downright hilarious.

The show is the brainchild of Executive Producer Bruce Marcus, CEO of Jersey Wooly Productions, Inc. I had occasion to speak with Bruce about the show and was excited to learn a number of things…

Bruce spends an incredible number of hours on the show, working to achieve broad-based appeal, as well as staying “true to the mission” of providing wine education and entertainment to as many viewers as possible. Right now, the half-hour show is on PBS stations around the country and is setting records for the number of stations it is adding in a short period of time.

Bruce told me that, prior to the start of the season, a group of experts evaluated over 500 wines, narrowing the field down to the 90+ that are to be featured over this first season. Bruce endeavors to always be “careful and respectful” of both the wines and the audience, while appealing to a wide range of wine drinkers, from experts to novices

According to Bruce, each show “takes its own course”, achieving the right balance of wine eduction and entertainment.

I told Bruce that my only complaint is that the show is only 30 minutes long. I love the entertainment aspect of the show, but would also like more time spent on wine commentary. Since the celebrity guests actually spend almost an hour evaluating the wines, much has to be left on the proverbial “cutting-room floor”.

Well, Bruce’s response was very good to hear. There is a good possibility that Vine Talk will become a nationally-syndicated 1-hour cable show, with the half-hour PBS version staying in place as well.

The other great news is that next season, Vine Talk will film half of its episodes in Los Angeles. Woo-hoo! I’ll post information as to how to try to become part of the studio audience as it become available. In the meantime, please tune in and join me in enjoying the current season.

Did you miss me? My blogs over the past two weeks were “Vintage Eve” articles as … END_OF_DOCUMENT_TOKEN_TO_BE_REPLACED