Last Thursday I was treated to a self-pour format tasting (Yes, professionals only!) of Rosé Champagnes and sparkling wines at Waterloo and City courtesy of The Tasting Panel magazine.  My Facebook status pretty much described my “celebratory” mood and got many comments:

“If you just saw a crazy blond seat-dancing in her car on the 405, yep, it was me BEFORE a wine tasting! Now, smile with me, okay?” 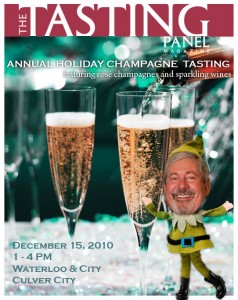 Note on professional tasting events: In these types of tastings I tend to swirl, note color, aroma, enjoy a miniscule swallow (while others spit or happily, and I mean happily, swallow much more).  I’m usually done in 60-90 minutes.  With this event, at only 34 wines, I could easily be done in 60.  Food was served but I waited until minute 59 to sit down with a full glass of water and have a few bites.  I find that food does help to move alcohol out of my system, but it interferes with a tasting like this.  If I have a driver I may go longer.  And, I sometimes wish for that luxury so that I can give each and every wine more than a thumbs up or down, and the briefest of notes.

With that said, here goes…

Greeted with nothing less than Riedel stemware, a pen and three pages listing 34 wines, I got started.  The prices ranged from $14 to $300, and as the sheets were numbered 1-34 in ascending prices, you were meant to start with the lower priced bottles.  (I told a friend that arrived as I was leaving to start at the end – to avoid palate fatigue by the time she got to the pricier wines if she hadn’t had them yet.  I know, I’m evil that way.)

Of the 34 these are the ones I liked the best:

Argyle 2008 Brut Rosé, Dundee Hills – $50 (Amazingly like a fruit-infused beer or ale.  When I remarked on this, peeps agreed.) 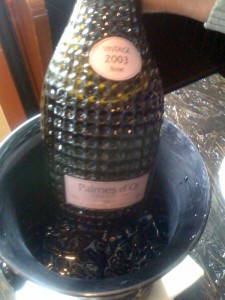 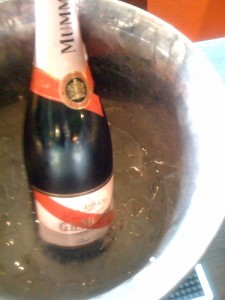 G.H. Mumm NV Brut Rosé – $75 (The most aromatic of the day, least acidic too.  Another one of my favorites.)

Delamotte NV Brut Rosé – $90 (OMG the entire cheese plate is in my nose!  Then, like a breeze wafting through, it blew off to reveal pale rose petals and fresh fruit.  Another favorite.)

Bollinger NV Brut Rosé – $100 (A 100-point nose, carried through to a taste that was balanced to perfection. Yes, it was another favorite.) 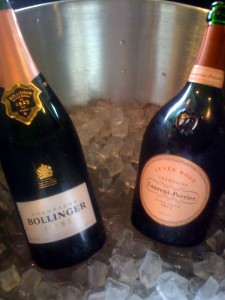 From here on, these were all favorited by me.  Just so I don’t sound repetitious:

Laurent-Perrier NV Cuvée Brut Rosé – $100 (A golden antiqued rose color greeted me, and as aromatic as a fine perfume followed.  Very balanced with a beautiful mouthfeel.)

Krug Brut Rosé – $299 (Pale aromas of flowers…maybe jasmine?  Or, I may have had “nose” fatigue at this point.)

Nicolas Feuillatte 2003 Cuvée Palmes d’Or Brut Rosé – $200 (Golden raspberry color.  A blast of cherry soda hit me on the nose like I just popped the lid on a Crush brand soda.  Really, really different.  Followed by honeyed plums.  All of the flavors in the nose were brought forward…simply awesome.  A pal readily agreed with me.)

Perrier-Jouet 2004 Belle Epoque Brut Rosé – $300 (A little flinty – but not in an unpleasant way, followed by nice, balanced fruit.)

At this time, I wished the Editor-in-Chief, Anthony Dias Blue a Merry Christmas – without a clue as to what he celebrated!

And, then, saving me from undue worry the radio played “Something tells me I’m into something good”…but I don’t think Herman’s Hermits ever had it this good.

Under the leadership of dynamic publisher Meridith May and renowned wine & spirits authority Anthony Dias Blue, Editor-in-Chief, The Tasting Panel Magazine is the most widely circulated trade publication in the beverage industry, reaching an audience of thousands of key decision-makers every month and growing rapidly on an international scale.

For more information about The Tasting Panel Magazine, visit www.tastingpanelmag.com.