I first met all four Hipsters that form the wine writing group, Hipster Enology, at a Rhone Rangers event I think.  Attracted to their hipster look, their witty repartee that transferred well into writing and…their taste for adventure.  That attitude, and heartfelt interest in all things wine, has led two of the four (Jesse Hiestand & Luke Mathews) to Australia to work in a winery. (The remaining couple covering wine here on the homefront, Ben and Renee Mason, I hope to see in Pasadena tomorrow for Family Winemakers!) 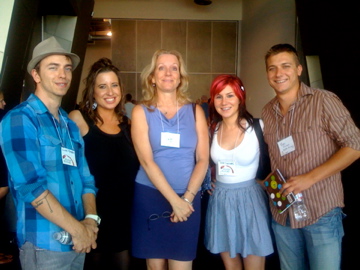 Luke, Renee, me, Jesse and Ben

We have officially joined the ranks of the NightRiders, working a night shift & proving our dedication to wine. Initially, we worked 7:00 PM to 5:00 AM, while our winery cycled through three shifts, including others dubbed the Daywalkers and Early Birds. We peacefully drift through the night, pressing white grapes, barreling down, racking & inoculating juices all while listening to music at eardrum piercing decibel levels. Indeed these working hours and volumes are reminiscent of the raving days of our youth. The shifts have now been reduced, putting us on a 12 hour cycle, from 8:00 PM to 8:00 AM, and pitting us against the Daywalkers. Who shall reign supreme?

Meanwhile, Australia is burning. Well, not all of it, but parts of Southwestern Australia are being consumed by brush fires approximately 150K away from our workplace, Xanadu Wines. Smoke has been so thick at night that we can hardly see across the crush pad and our high visibility safety gear smells more like a BBQ than work. Concerned, the winemakers began a trial of more than 30 micro ferments to test if any future wine would be tainted by the smoke. Happily, no traces were detected due to the majority of the growing season having already passed. It is a bright note in an otherwise devastating fire.

This vintage is already a little different for us. Whereas before, our estate and contract tallies neared 300 ton, we’re working at a winery with the capacity for 5,000. We will see around 1800 ton before the harvest is through. To date, we have already brought in nearly 600 ton. Amongst the tonnage are two interesting staff projects, including a barrel fermented Sauvignon Blanc ‘Serum’ sitting on its lees and a skin contact Semillon ‘Money Shot.’ We’ll be sure to let you know how these come out.

One final note, we took our beloved Blue Balls in for a check-up to Dr. Azza, our winery mechanic. Frankly, he was surprised that we were driving the car at all due to the front left wheel only being held on by a weld, and a poor one at that. Desperate times calls for desperate measures, so we temporarily solved the issue by, you guessed it, a bigger weld. Luckily, Az soon sourced a hub assembly and CV joint. While Blue Balls was laid up, we zipped to work across the vineyards and forest on a very tiny 50 cc scooter, also blue & worse for wear.

To See Photos of our Experiences or Read More, visit: Hipster Enology | Wine. Bring it. http://hipsterenology.com/#ixzz1orEGDoOd