This is the first of two articles I will be writing over the next few weeks on Wolf Creek and their success. This article is going to cover the grand opening of the first commercial brewery in the Santa Clarita Valley and I can’t think of better way to start. I was accompanied on this visit by my son, Sean, and my wife, Tracy. Sean has been a Wolf Creek follower, as far as the beer goes, for five years since the day he turned 21. Tracy and I took him there for his 21st birthday so he’s been spoiled from the beginning. (As most of you know, microbrewed beers are commonly higher in alcohol so remember to be careful and drive responsibly. Since Tracy does not care for beer she was our designated driver.) 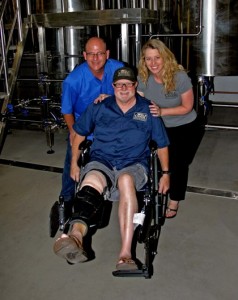 The new brewery is a joint venture by Rob and Laina McFerren and Darren Utley. It is a large investment to step up this level of brewery. The benefit of having the new brewery, however, is that Wolf Creek Brewery will be able to produce larger quantities and more varieties not just for both of their restaurants but commercially. Rob slaved as a one man show when brewing at Wolf Creek in Valencia for their two restaurants. Now he has taken on an Assistant Brewer, Joseph Isaac, to help him tend to the production of his beers as well as a crew. Joseph is very energetic and is fortunate to be mentored by such a great brewer as Rob. Needless to say I am quite envious.

Guests at this grand opening were provided fantastic foods and cheeses to go with the selection of beers on tap listed below:

· Howlin Hefeweizen – ABV 6.2%. German style beer with characteristic banana and clove flavors. Hops used are German Hallertauer. One of my favorite beers and Rob has won many awards with this beer.

Guests were also given a tour by Rob, Joseph or Darren describing the brewing process. Our tour was led by Darren Utely who informed the guests that there are only four ingredients used in beer production: barley (wheat is used in German style beers), water, hops and yeast. Barley is responsible for providing the food for the yeast. Yeast by products are alcohol, carbon dioxide and heat. He also showed that barley, based on the amount of toasting, can add color and flavor variations. Samples were offered for everyone to taste but it wasn’t until a few of us tried it to convince people it was a good thing did they follow. As a home brewer, it is not uncommon to taste grains when putting together recipes. Each grain is unique in flavor and will help increase the complexity of a beer.

Darren made a statement about brewing that is right on the money. Making really great beers involves good sanitation and ability to repeat a recipe. These things are easy to accomplish my most everyone with the proper equipment. However, he continued by adding the comment it goes beyond following a recipe and being consistent with your brewing process it involves an artistic instinct that comes from within that not everyone possesses. Lucky for us Rob McFerren possesses this artistic instinct. He pushes the envelope on some beer styles but they are always great and enjoyed by customers and judges alike. In the competitive beer world Rob has won many awards for his beers over the years. 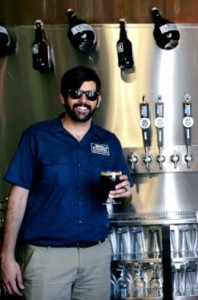 If you have never been to a brewery, tried microbrews or been to Wolf Creek Restaurant, I highly recommend that you do. If you are a first timer, go for the flight. This will allow you the opportunity to see the unique artistry that Rob uses in creating his beers. He is a fabulous brewer and with the Wolf Creek Pack (two restaurants and now a brewery) I see a huge success. They opened their first restaurant April 1, 1997 in Valencia. They opened a second restaurant in Calabasas and now the brewery in Santa Clarita. To survive in this tough economy and continue to grow is nothing short of amazing. Need I say more?