Imagine tasting and visiting where German wine is made.  What did you conjure?  Everything sweet and simple?  A people cold and distant?  A place beautiful in pictures but not drawing you to explore?

Well, I now know firsthand that none of those pre-conceptions jibes with reality.

My family and I recently took a whirlwind tour of Germany, going from Bonn and Cologne (what a Cathedral!) to Nuremberg and Dresden (haunting images of the Nazi past, with hope for the future) and finishing in Berlin (an international, cosmopolitan city that is still trying to define itself with Hitler on one hand contrasting with the many things Germany has to be proud of).  We also made a quick stop at the Nurburgring (the home of the German Grand Prix) so Ted, our oldest, could attempt to set a track record in an Aston Martin.  Close but the record still stands.

But ever since my wine awakening, I can’t visit any country without also delving into its fermentation story.  And that’s what we did when we went to the wine region along the Mosel River. 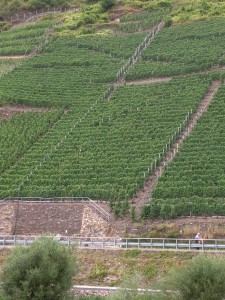 We tasted at three weinguts (German for wineries).  Took us two days.  (First piece of advice, tasting on the Mosel is serious business – treat it that way and the winemakers will respond.  The tastings can easily consume three hours – plan accordingly.)

In the next three columns, you’ll read about our adventures along the Mosel, why we now respect and enjoy Riesling, and our new friends in southwestern Germany.

Likely you’ve read about how the vines along the Mosel are planted on steep slopes and are planted only on the southern exposure to capture as much sun as possible.  You may even have seen pictures.  But until you actually visit, you have no idea. 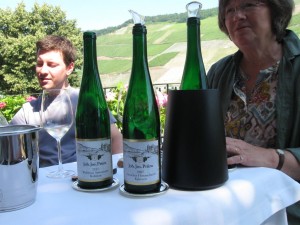 Maybe we’re too soft in California.  You’d never see vines on slopes with a 30% or greater gradient.  But take a look at these pictures.  The Germans plant where goats fear to tread.

Our first visit was to Joh. Jos. Prum.  Frau Amei Prum, wife of Manfred Prum, owner and winemaker, lead our tasting.  First question, dear reader.  How many high-end, expensive wineries have you visited, only to be hosted by one of the owners?  If you’re like me, the answer is never.

Frau Prum explained all things German wine to us while plying us with increasing delicious examples.

I wanted to know who picked the grapes and how the hell they did it without multiple deaths and serious injuries.

Contrary to old folk tales, it’s not middle-aged German women who do the picking.  Now, it’s Polish women (I forgot to ask their age).  But how in the world do they get up and down those slopes without tumbling?
buy plavix generic https://buywithoutprescriptionrxonline.com/plavix.html over the counter 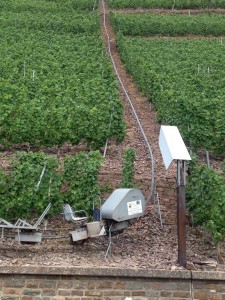 They get to use the German version of an E-ticket ride.  See the rail going up the slope in this picture?  The pickers jump onto this sled and traverse up the hillside.  Now this may take the ordeal out of getting to the top but you still wouldn’t catch me vying to help with the harvest.

The harvest starts at the bottom of the hill and the pickers work their way up.  Harvest takes between four to five weeks to complete.  Except, of course, for picking the grapes for Prum’s Eiswein.

In making the wine, Prum does not add any sugar or commercial yeast.  So, how do you make sure that fermentation occurs when and how you want it, I asked?  “We use only what yeast comes with the grapes.  So what happens, happens,” she replied.

Also going against tradition in California, no oak is used – only steel.  She explained that Prum has been making wine since 1911 (they just celebrated their 100th anniversary), so I guess I won’t question success.

We learned all of this before we even began tasting.  This was not only a treat for the senses but also an in-depth education on Mosel wine making.  I’ll talk about the wines Frau Prum offered in my next column.

Back in 2009, or maybe even a bit earlier, I had an appointment with our … END_OF_DOCUMENT_TOKEN_TO_BE_REPLACED