Cushing Donelan (Cush for those who know him) trained at the prestigious liberal arts college, Amherst, as an artist and sculptor.  He was mega-hunk, Matthew McConaughey’s, personal assistant, joining him on set and in intimate meetings with Michele Obama.

Google him and you’ll find gorgeous photos of his wedding and his turn on YouTube as a guide to his recently-adopted hometown, Venice, CA. 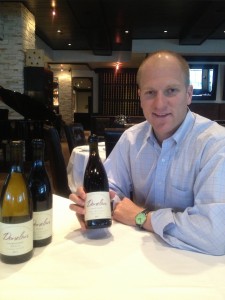 New to his resume is Director of Marketing for family-owned winery, Donelan.  Cush has been doing this for about nine months and it looks like he’s having a blast.

He and I met in Encino at Larsen’s to talk about him, the Donelan winery, and the highly-anticipated tasting he and his brother, Tripp, are hosting for the Santa Clarita Boys & Girls Club on September 10th at 6:30 at Salt Creek Grille in Valencia.

Donelan has been through some significant changes since it was known as Pax Cellars.  Back then, Joe Donelan (Cush’s dad) and Pax Mahle, the winemaker, were producing mainly Rhone varietals to great acclaim.  But the bloom was soon off the rose and Joe and Pax parted company and wound up in court.  Apparently the differences were settled after paying some hefty attorneys fees but no one is talking.  Pax Cellars is gone, and in its place is Donelan.

One of the first things Joe did when he started the Donelan label was to lower prices 15% from the old Pax prices and he’s kept them there since then.  But while the prices are more reasonable, he’s still receiving rave reviews from Parker and Wine Spectator.

Another upcoming change is what Cushing dubs Donelan 2.0.  The goal is to strengthen the business and build more brand identity.  And the winery is shifting from Rhone to one-third Chardonnay, one-third Pinot Noir and one-third Rhone.

Cushing, as Director of Marketing, realizes that these goals and changes don’t translate over night to market success.  He calls it a “marathon process.”

Having enjoyed Donelan wines for the past few years, I’d give the Donelan boys a fighting chance to complete the phoenix-like rise from the ashes of Pax to a well-respected Sonoma producer sourcing great fruit from Green Valley, Sonoma Valley and Knights Valley.

If you join us on September 10th at Salt Creek, you can judge for yourself how well Joe and his sons are making the transition.  Tickets are $75 each and 100% of the money raised goes to benefit the Boys & Girls Club.  You can get the tickets either by calling the Club at 661-254-3063 or go to their website at http://www.scvbgc.org/ .  Hope to see you there.  I know Cush bring his artistic best – it will be unforgettable.