Peter Goossens has hit this one out of the park.  Both the selection of beers as well as vendors were fantastic.  The beers at the festival for all to enjoy were not your typical run of the mill beers.  Not only did you get to taste the traditional but also the modern Belgian ales which wan intriguing.  The different styles included Gueze, Trappist, Saison, Pale, just to name a few.  The flavor profile of each beer was unique.  This definitely was a beer lovers nirvana. 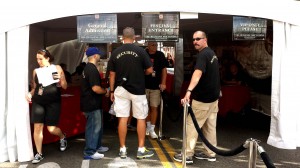 For traditional Belgian styles I liked all that was poured but must admit I had a handful of favorites.  In fact if you caught me dumping any of the beers it was to maintain control.  Let’s face it, with this many vendors and beers that ranged from 6-10% or more ABV it will get the best of you by the end of the evening.

At first I thought that there was not going to be any Gueze but that was quickly faded away as Peter led me to a vendor that was pouring Cuvee Rene Gueze Lambic Beer.  Gueze is a very unique beer and definitely not for everyone’s palate.  Beer Advocate places a 91pt rating on this beer.

Gueze and Lambic beers are in the same family or style.  This family of beers does not use the cultivated yeast that such beers as Porters, Stouts, Pilsners or IPAs.  Rather, the brewer uses wild yeast that ferments the beer spontaneously.  The wild yeast used in Belgium creates a sour, acidic nature.  Aside from the Gueze there were a few examples of Lambic styles where fruit flavors are added to the sour beer.  Lindeman as well as another favorite of mine from Flanders, called Duchesse de Bourgogne which was named in honor of Duchess Mary of Burgundy that was killed in a horse riding accident, were poured in the line-up of this beer style.

Another beer, or bier, that I feel in love with was Poperings Hommel.  Listed as an IPA, Natasha Walewski (Retail Market Manager for Global Beer Network) said it was a Pale Ale. 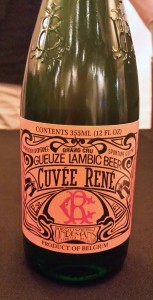 This is probably the results of Americans view of IPA verses European view.  Americans want the hop bitterness to be so high that it curls your toes and destroys your palate with high alpha acid hops that are reminiscent of chewing on grapefruit skins.  Belgium, England, etc., use low alpha acid noble hops that impart a beautiful floral flavor with slight amounts of spice.  Poperings Hommel was a fantastic example of how to make an IPA that is very good but different using noble hops. 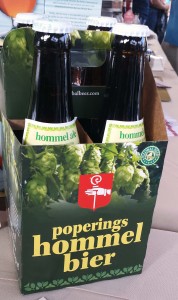 Moving up from the IPA/Pale ale I found an old friend that I fell in love with at the last years Belgian Festival, St. Stefanus.  The recipe and process dates back to 1295 when this Abbey beer was contracted out to the Van Steenberge Brewery where the tradition and recipe has been maintained.  This Belgian Blonde is extremely flavorful and shares something in common with wine.  It develops different flavor profiles as it ages.  Like wine, it has a lot of fresh and fruity flavors when it is young but as it ages it increases in complexity and aromatics.  The brewer uses three different strains of yeasts and will not release his beer to the public until he is happy with the product.  The bottle has his signature and the expected flavor profile along with the date it was made.  Based on the different variables as yeast strains, aging, etc, this beer varies from release to release.

Then there were the Saisons.  This beer is known as a farmhouse ale and is one of my favorites.  This beer has beautiful clean refreshing flavors of clove, coriander, lemon, etc.

In the old days it was made for farm workers as a refreshment.  Today, with the higher alcohol, I would doubt that you would want to do this.  In those early days it was believed the alcohol content was 3 – 3.5 ABV verses today’s 4.5 – 6.5%.  There were many examples of this style but the one that I enjoyed most was St Feuillien Saison, it was a classic Saison.

Moving into the darker ales from Belgium there was a good example an Abbey Brown Ale called Corsendonk.  In the past I have not been very fond of Corsendonk beers but the sample poured at the festival has won me over.  Beer Advocate rates this beer 90 points.  The flavors of caramel and raison were just phenomenal.  I can picture myself sitting by the fireplace on a cold rainy day and drinking this beer.

Now for the grand finale.  St. Bernadus Abt 12 is known as a world class beer receiving a 99 pt rating from Beer Advocate and is always in high demand.  This is a Quadruple and weighs in at 10% ABV and is known as is a sipper.  As you smell and take a drink of this beer you get the beautiful flavors of caramel, molasses and toffee along with raison and plum.  The key to this beer is not to drink it ice cold otherwise you will not get all of the complexity, beautiful flavors and malt characteristics that it has to offer.  It is an absolutely outstanding beer.

One more beer vendor I would like to mention is from our own Santa Clarita Valley.  Wolf Creek Brewery was pouring their multiple gold award winning Hefeweizen along with a Belgian style Triple that they call Surfin’ Monks.  This Triple provided a good example of American style Belgians showing the differences between old and new world styles.  This beer is 10% ABV with flavors of caramel, orange and cumin along with mild citrus from the hops. 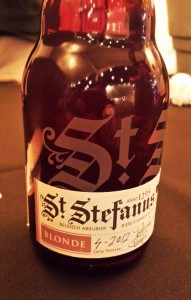 If you were unable to attend this event I would put it on my calendar as a “MUST DO” when Peter lines up another one of these events.  As a home brewer of almost 30 years, I still find new beers that blow me away.  At this festival I was truly enlightened to new beers.  Belgian beers will always be one of my favorites.  Hope to see you next time at the festival, I guarantee you will not be disappointed.