I’ve never devoted one of my columns to one block of one town in one wine area.  Thinking no one else has either.  So, for fun, I’ve written about some of the places on Pine Street, in downtown Paso Robles, which we visited on our last trip and suggest that you visit too!

The Hotel Cheval had been highly rated and suggested time and again by friends as the perfect place to stay in Paso.  Centrally located less than a block away from the large square park in the center of downtown, City Park, and walking distance to restaurants, bars, candy stores, shopping, a movie theater, cookie shop, wine bars…Hotel Cheval is a quaint romantic hotel that boasts more amenities than most. 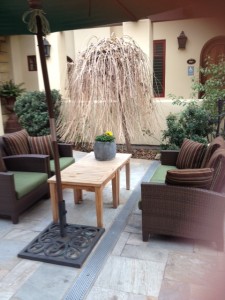 After checking in at the beautifully furnished lobby and checking out their signature jewelry and warm cookies we were handed a real door key.  In our “Classic Room” we found thirsty robes, an electric fireplace, a private patio with a fountain, bottled water for the coffee maker and nightly turn-down service.

Outside in the courtyard there were numerous comfy corners to read/drink/chat by a couple of outdoor fireplaces.  In the morning the complimentary breakfast in the adjoining Pony club had so many choices – bagels, deli meats, cheeses, cereals, breads, muffins, fresh fruit salad, juice, coffee, etc. – there was no need to go out for breakfast.  We also enjoyed checking out the library, spa, and…solicitous bartender Bradford Thompson-Young in the Pony Club.

The hotel is dog friendly, as is the Pony Club bar, but check the rules first. Happy hour in the bar goes from 5 until 7 p.m. with all wines by the glass for $7 – no matter if it’s the most expensive wine by the glass on the list (yes, I ordered it).  We met some fun people in the bar and enjoyed more people-watching on the patio on Pine.

All in all I thought the hotel a great option for romantic couples, and for those that really don’t want to drive after dining.  We enjoyed our stroll to and from our hotel so much that we did it multiple times. 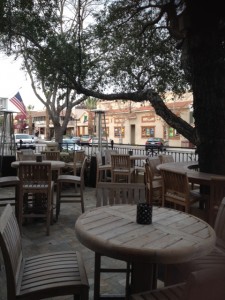 After we shared a glass of wine at the Pony Club before dinner, we left the patio and started to stroll up Pine Street.  The blast of hot buttered popcorn from the movie theater tickled our noses and we thought, should we skip dinner and do a movie and junk food night instead?  But, we remembered that Taco Tuesday at Villa Creek Restaurant came highly recommended by Annie Browne, of the Hoot n Annie Paso blog, so we forged ahead.

It still was difficult, as then we also had to pass Pappy McGregor’s Pub and Grill.  We had lunch on their patio with locals on past trips and it was very fun.  We also passed, but this time we stopped into, Rocky Mountain Fudge, so my husband Eddie could buy a piece of candy to have after dinner.

When we finally got to Villa Creek, a restaurant I had always wanted to go to as I am a fan of Villa Creek wines and winemaker Cris Cherry, I spied two other favorites we would miss: Bistro Laurent and Artisan.  Hard to turn either of those down, but by this point we didn’t smell popcorn or chocolate anymore, it was definitely taco time.

We had heard to expect a crowd of winemakers and other winery workers, but it didn’t seem too bad to us for a weekday crowd.  We were quickly seated in the bar and within minutes I had ordered the Carnitas Taco and the Roasted Turkey and Mole Taco, paired with a Kukkula Zinfandel.  Eddie got the Fish Taco and the Carnitas as well, paired with a Moscow Mule (correctly served in a copper cup).

I sort of complained that there were no Villa Creek wines by the glass on the bar menu.  I was told that I could get a flight, and that winemaker Cris Cherry was dining inside and I should say hello to him.  Well, bolstered by wine, I grabbed a biz card and strolled over.  I told Cris how much I loved his Rhone blends, had visited him three years ago and wrote about his wines back then for my site.  He invited me to come and taste at the winery the next day, but our day had been planned out – so I ended up ordering that flight instead.  It included four healthy pours of a Roussanne, two Rhône red blends, and a 100% Mourvedre.  Score!

But it didn’t end there.  Cris and his son were eating something others had told us to try, so when I got back to the table I mentioned it to Eddie.  Instead of more tacos how about the mile-high “Not Nachos” chips that came covered in corn, duck confit, mole sauce and God-knows what else.  When the huge dish arrived I slid my Roussanne to one side, to have as my dessert, and happily dove into those chips with my Rhône blends.  Awe-someness! 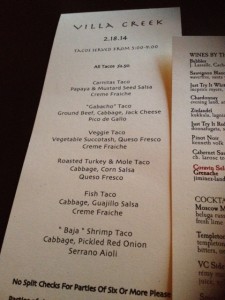 On a side note, as we walked back to Hotel Cheval we reflected on one sour note brought up to us by a man that had bought a home in Paso for his retirement.   He said locals were not happy about Wine Enthusiast magazine naming them as the Wine Region of the Year.  They were fearful of becoming the next Napa.  Eddie and I thought, I guess that could happen as Paso Robles is twice the size of Napa, but where would Pine Street go?  The infrastructure – hotels namely – are not enough right now for some busy weekend, amphitheater and fest crowds.  It seemed to us that the area deserves the title and the infrastructure will follow, as soon as we all let it.  Hopefully it will be a graceful transition and all of our favorites will remain exactly where they stand today, proudly on Pine.

Note: Some of the wineries we visited (DAOU Vineyards, Law Estate and J Dusi) have been written about by my esteemed staff writer Rusty Sly and/or Contributing Editor Michael Perlis.  So my coverage of those and a few others will be in the other website I write a weekly Friday column for: those reviews will be found in The SCV Beacon.

Alella, a small wine district in the north eastern part of Spain centers around … END_OF_DOCUMENT_TOKEN_TO_BE_REPLACED