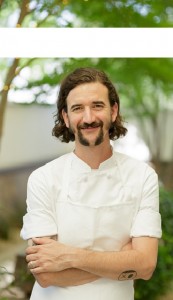 After graduating with an AOS in Culinary Arts from the Culinary Institute of America in Hyde Park in 2003, Chef Kunk went on to expand his culinary and pastry education at Charlie Palmer’s Aureole. In 2004, he transitioned to Blue Hill, working his way up from cook to sous chef and then finally on to chef de cuisine, a position he held from 2007 to 2014. 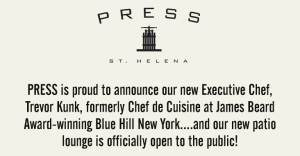 Chef Kunk’s move to Napa Valley in spring 2014, prompted in part by a desire for a friendlier year-round climate, was excellent timing for PRESS. The restaurant was in need of a chef to take full advantage of the agricultural bounty of Rudd Farms and the Chef’s Garden at Edge Hill, two Napa Valley farms that exist exclusively to support PRESS, Oakville Grocery, and Dean & Deluca, and given his extensive experience and wealth of knowledge, Chef Kunk was a natural fit. His commitment to the sustainable food movement and land stewardship is apparent in his encouragement of the entire kitchen staff to spend real time in the fields and cultivate individual relationships with the farmers.