1994, working late at night, someone brought 1991 Silver Oak PR, NAPA – drank it from a plastic cup. Hooked instantly and never looked back … 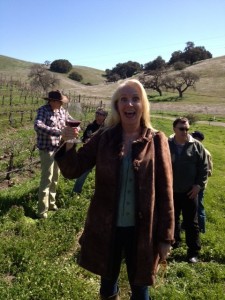 From you! What is the best BP reducing wine? I need some NOW!

It was about 1994 when a neighbor made me a delicious caesar salad for lunch and served a lovely merlot with it. I had previously thought I didn’t like wine and boy, was I wrong!

We’ve been in a serious relationship ever since.

well…first time was severely wounded…Boones Farm circa late 80’s, Santa Monica Pier does that count as wine?? bleh!!
You did say FIRST time 😉

1995..Napa Valley, I had been visiting a lifelong friend, and instead of going to San Fran as planned, we went to Napa, we had NO CLUE what we were doing..but we had a BLAST!!! 7 years later I got into the local wine industry, and now I have preparing to complete my Certified Sommelier training and am a Wine Club/Events/Outside Sales Manager and assist the winemaker.

The world of wine is so amazing!

I am a newbie.. My friend Sandie introduced me and I am trying hard to act like I know what I am doing….

It would have been in the late 1980s when I was in college. I worked at this fine dining restaurant called “The Cornhusker” in Lincoln, Nebraska, and we had a wine connoisseur came in to give us a class. I won my first bottle of wine, Clois Dubois Merlot and have been hooked on red wine since. At one point I wanted to be a wine connoisseur but opted to study opera instead. My problem is I like to swallow the wine rather than spit it out 🙂

Jacki, I’m still a newbie after several years!!  From the few short weeks I have “met” Eve she will teach us everything we will need to know! I love going to wine tasting events and learning as much as possible when ever possible. I ask a lot of questions!! I think Eve is going to make it more simpler to understand and make it fun while learning!!

I am so excited.. As soon as something comes up I will be there. I need someone to teach me more about wine. I think Eve will be the best.

I was at the “Posse” in Austin, Texas (well known beer barn and parking lot hangout.) You see, they put this red jug wine in a big ole styrofoam cup and mixed it with 7up and threw in a lime. I was like, whoa, I think I’ll raid the Chi-O house. Yes, it was that good…