WHAT: LUCQUES, the flagship restaurant owned by Suzanne Goin and Caroline Styne, presents three special dinners inspired by the new fall cookbooks by Jean-Pierre and Denise Moullé, long-time Chef of Chez Panisse; Gabrielle Hamilton of Prune; and Charles Phan of The Slanted Door.

Suzanne Goin and Chef de Cuisine Javier Espinoza will design a prix fixe menu sourced from recipes from each book as interpreted by Lucques’ culinary sensibility. Pricing for all dinners is $55 per guest. Books are sold separately.

On each scheduled dinner, the Guests Chefs will be present to meet guests and sign books. The book will be available for purchase at Lucques during the evening. Menus to be announced.

French Roots: Two Cooks, Two Countries, and the Beautiful Food along the Way

ABOUT JEAN-PIERRE AND DENISE MOULEÉ AND FRENCH ROOTS:

Jean-Pierre and Denise Moullé met on a street corner in Berkeley, California, in 1980; six months later they were married. French Roots is the story of their lives told through the food they cook—beginning with the dishes of old-world France, the couple’s birthplace, and focusing on the simple, pared-down preparations of French food common in the postwar period. The story then travels to the San Francisco Bay Area in the 1970s, where Jean-Pierre was appointed chef at Chez Panisse when California cuisine was just emerging as a distinctive and important style, and where Denise began importing French wine. Finally, the journey follows the couple to their homes in Sonoma, California, and Bordeaux to revisit the classic dishes of the Moullés’ native country and hone the forgotten skills of foraging, hunting, and preserving.

ABOUT GABRIELLE HAMILTON AND PRUNE:

A self-trained cook turned James Beard Award–winning chef, Gabrielle Hamilton opened Prune on New York’s Lower East Side fifteen years ago to great acclaim and lines down the block, both of which continue today. A deeply personal and gracious restaurant, in both menu and philosophy, Prune uses the elements of home cooking and elevates them in unexpected ways. The result is delicious food that satisfies on many levels. Highly original in concept, execution, look, and feel, the Prune cookbook is an inspired replica of the restaurant’s kitchen binders. It is written to Gabrielle’s cooks in her distinctive voice, with as much instruction, encouragement, information, and scolding as you would find if you actually came to work at Prune as a line cook.

ABOUT CHARLES PHAN AND THE SLANTED DOOR COOKBOOK:

Award-winning chef and restaurateur Charles Phan opened The Slanted Door in San Francisco in 1995, inspired by the food of his native Vietnam. Since then, The Slanted Door has grown into a world-class dining destination, and its accessible, modern take on classic Vietnamese dishes is beloved by diners, chefs, and critics alike. The Slanted Door is a love letter to the restaurant, its people, and its food. Featuring stories in addition to its most iconic recipes, The Slanted Door both celebrates a culinary institution and allows home cooks to recreate its excellence. 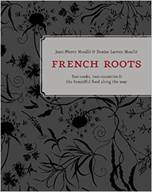