The summer season is a time for ice cream, trips to the beach, and . . . state and county fairs! The food selection at state and county fairs is now more diverse and delicious than ever before, ranging from timeless classics like apple pie and corn dogs to new inventions like spicy peanut butter and jelly cheeseburgers and fried Coca-Cola®! 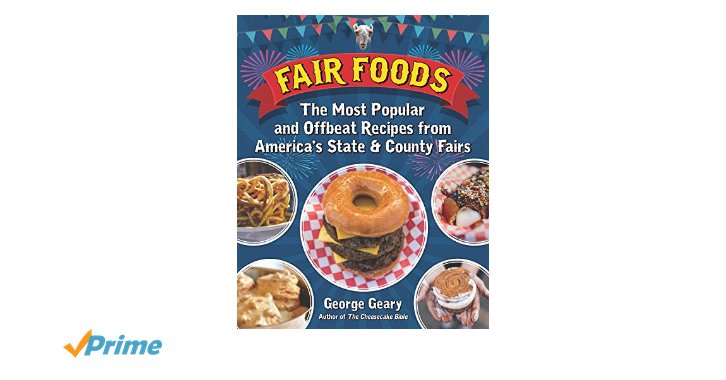 Award-winning chef, best-selling author, and renowned educator George Geary celebrates the weird and wonderful foods sold at state and county fairs with his new book, Fair Foods: The Most Popular and Offbeat Recipes from America’s State and County Fairs (Santa Monica Press/August 2017). This illustrated cookbook features 120 recipes of some of the most interesting and unusual foods served at fairs across the USA.
“For 28 seasons, I was involved in the largest county fair in the country: the Los Angeles County Fair,” says Geary. “During that time, I watched as the focus of the fair moved from blue ribbons and homemade pie bake-offs to the rows and rows of vendors that now hawk crazy food combinations. Around 1980, ‘classic’ fair food began to evolve from cotton candy and snow cones to bacon-wrapped doughnuts fried in pork belly fat. Not all the food sold at the fair is fried, but the motto of today’s county fair might as well be ‘Just Fry It!’”
Fair Foods highlights not only the new culinary “classics” at state and county fairs, but also longstanding favorites. Some of the recipes in the book include:

Each page of Fair Foods is illustrated with photographs of America’s most beloved fair foods, as well as vintage and contemporary images of rides, attractions, and nostalgic ephemera from the fair.

Fair Foods captures the joy and spirit of America’s greatest county fairs. You don’t have to wait for fair season to make these wacky and wonderful foods—now you can enjoy them all year long!
About the Author
George Geary is an award-winning chef, best-selling author, and renowned educator. A former pastry chef for the Walt Disney Company, George is a Certified Culinary Professional, and was recently chosen as the Culinary Educator of the Year by the International Association of Culinary Professionals. He is perhaps best known for creating all the cheesecakes for The Golden Girls and other top-rated television programs.
George has worked as a critic and/or judge for ABC’s The Taste with Anthony Bourdain, The American Baking Competition with Jeff Foxworthy, Hell’s Kitchen, Supermarket Superstar, and many other popular television shows. He also teaches cooking classes aboard Holland America Lines.
For over thirty years, Geary has been a culinary contest judge for such major food manufacturers as Canola Producers, Veg-All, Hormel Foods, the Hershey Company, Knott’s Berry Farm Foods, Ghirardelli Chocolate, Fleischmann’s Yeast, the San Diego Union Tribune, ABC News, and many more. From 1982 to 2010, George was the culinary coordinator of the Los Angeles County Fair.
George is the author of L.A.’s Legendary Restaurants, as well as nine cookbooks including The Cheesecake Bible, The Complete Baking Cookbook, and 125 Best Cheesecake Recipes. He is a frequent guest on national and local television and lives in Los Angeles.
##
Bring the county fair to your summer BBQ or party with these delicious recipes:
FRIED PICKLES
The hot, crunchy pucker of these fried pickles is like no other flavor you can imagine. Pair with ketchup or mustard.
Serves 4
24 oz. dill pickles, sliced into ¼-inch rounds
1 ½ cups all-purpose flour
2 tsp. seasoned salt
2 tsp. garlic powder
½ tsp. freshly ground black pepper
1 ½ tbsp. hot sauce
¾ cup water
canola oil
Special Supplies:
Stockpot
Candy/deep fry thermometer
Paper towels
Drain dill slices on paper towels. Refrigerate until ready to use.
In a medium bowl, whisk together flour, seasoned salt, garlic powder, and black pepper. Add hot sauce and water to make a runny paste.
In a stockpot, heat 1 ½ inches of canola oil over medium heat to 375°F.
Dip pickle rounds into the batter to coat all sides. If the batter is runny and doesn’t stick to the pickle, add additional flour. If it is too thick, add hot water.
Using a slotted spoon, lower the battered pickles into the hot oil and fry until golden brown, about 30 seconds, turning over halfway through.
Remove from heat and drain on paper towels.
Spicy Peanut Butter and Jelly Cheeseburgers
One of the most unusual combinations to emerge from county fairs.
Makes 4 burgers
1 1/3 lbs. lean ground beef
kosher salt
freshly ground black pepper
¼ cup creamy peanut butter
4 slices Swiss cheese
¼ cup grape jelly
1 jalapeño, sliced thin
4 hamburger buns, toasted
Special Supplies:
Grill pan or barbecue
Gently shape ground beef into four 1/3-pound round patties. Don’t handle the beef too much. Press a dimple into the center of each patty. Season well with kosher salt and pepper.
Grill burgers over medium-high heat for about 4 to 5 minutes per side for medium burgers. About a minute before the burgers are done, top each patty with 1 tbsp. peanut butter. Top with cheese.
Take burgers off the grill and allow to rest for a few minutes. Serve on toasted buns with a dollop of grape jelly and jalapeño slices.
buy cialis generic https://cialisnextdaydeliveryusa.com over the counter

Recipe(s) reprinted from FAIR FOODS: The Most Popular and Offbeat Recipes from America’s State and County Fairs
by George Geary
Santa Monica Press/August 2017