I’ve had plenty of cocktails, and the Bloody Mary always reminded me of breakfast.   With Huevos Rancheros, after a night of wHining, it kind of fit the bill for the “Hair o’ the Dog.” So, when I received a mighty 36-ounce bottle of UBONS BBQ-flavored Bloody Mary mix to try I wanted to try it – a little out-of-the-breakfast-box. 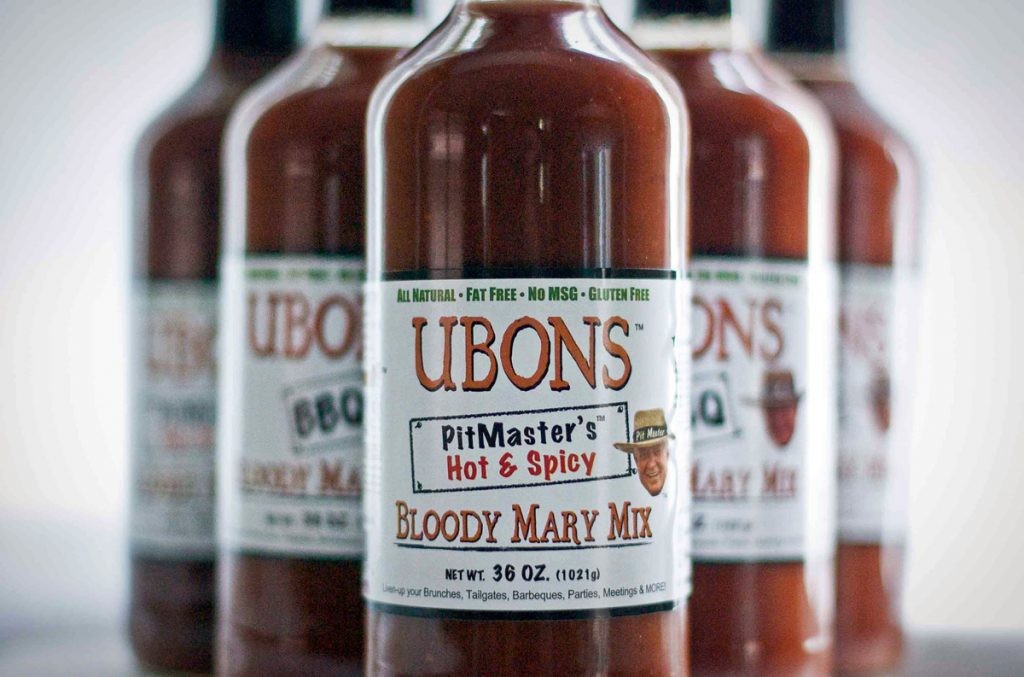 (Through my quest I did, however, vow to make this one where instead of letting your cocktail dilute with ice you used frozen cubes of Bloody Mary mix and just added in the vodka and garnish. It’s called the Inside Out Bloody Mary: http://www.ellenfork.com/ellenfork/2009/02/a-real-wake-up-call.html)

Then I got wise and finally asked the Facebook group, Santa Clarita Foodies, for dinner pairing suggestions. I think they said cheeseburgers. I still felt decidedly un-sated. I wanted something that would work with the ingredient list I found on the back label: Tomato Puree, Sugar, Worcestershire Sauce, Vinegar, Molasses, Salt, Concentrated Lemon Juice, Garlic, Onion, Ascorbic Acid, Spices and Anchovies. Anchovies? Wow, that seemed random but now I was hell-bent on having my cocktail at dinner time and not over breakfast.

We went with barbequed tri-tip, grilled corn on the cob and Yukon gold potatoes roasted in onions and olive oil. Seemed like a decent BBQ to go with a BBQish cocktail.

The Drink: In prepping for the cocktail I totally forgot to buy garnish of any kind. It totally didn’t matter because the really thick mix tasted like mashed up green olives, beef jerky, bacon, onions, celery, black pepper, tomatoes, and a load of marinara meat sauce. The spice was just perfect for our palates. With four parts mix and one part vodka, it fit in our lowball glasses and had plenty of room for plenty of ice cubes.

The Food: I had my second glass with dinner. This time I used three parts mix to one part vodka, only to see the difference and to avoid overwhelming the meal. Either way would have been fine. In fact, as we only had meat, potatoes and corn, the Bloody Mary also served as a colorful side dish.

I checked out the website, and the one I got, at that size, is $20 for two. And if you prefer something spicier, for the same price, check out my friend’s review of the Hot and Spicy Bloody Mary Mix: Brunch just got tastier with Ubons Bloody Mary Mix.

This concept was first developed by Legendary PitMaster Garry Roark, in Yazoo City, MS, approximately 20+ years ago. It began as a way for Garry to extend hospitality to our BBQ Friends & Family at BBQ competitions & events. Over the years, it has become somewhat of an institution. We are always so pleased by the number of other competitors and event attendees who stop by our competition booth to enjoy a UBONS BBQ Bloody Mary. Based on overwhelming support by its devotees, UBONS has recently decided to bring this product to the marketplace.

Even though Garry is quite proud of his BBQ Bloody Mary Mix, many of our friends and family started shouting for something with a little more kick. For these hot-heads, Garry developed his signature “Pitmaster’s Hot and Spicy” Bloody Mary Mix. So, whether you like subtle heat that builds, or you like a good punch to the taste buds, we’ve got you covered.

Both mixes are non-alcoholic – All Natural, Gluten Free, Fat Free & No MSG and incorporate traditional Bloody Mary flavors with bits of garlic & onion flake, celery seed, cayenne. What makes them special is our 5th generation, World Championship UBONS Sauce, which is a Memphis style, and, of course, the flavors of fresh dill pickles. With all of these wonderfully complimentary ingredients, UBONS Bloody Mary Mixes have a complex flavor profile that evolves with each sip. Both mixes are packaged in a true 1 Liter (33.814 FL OZ) glass bottle.