Though being a past judge for the Long Beach Grand Cru was a major bucket list item for me, it was nearly as thrilling to be invited back as a guest of the event once they discontinued the wine competition. Basically, the work was over, it was time just to taste for pleasure. And that we did. 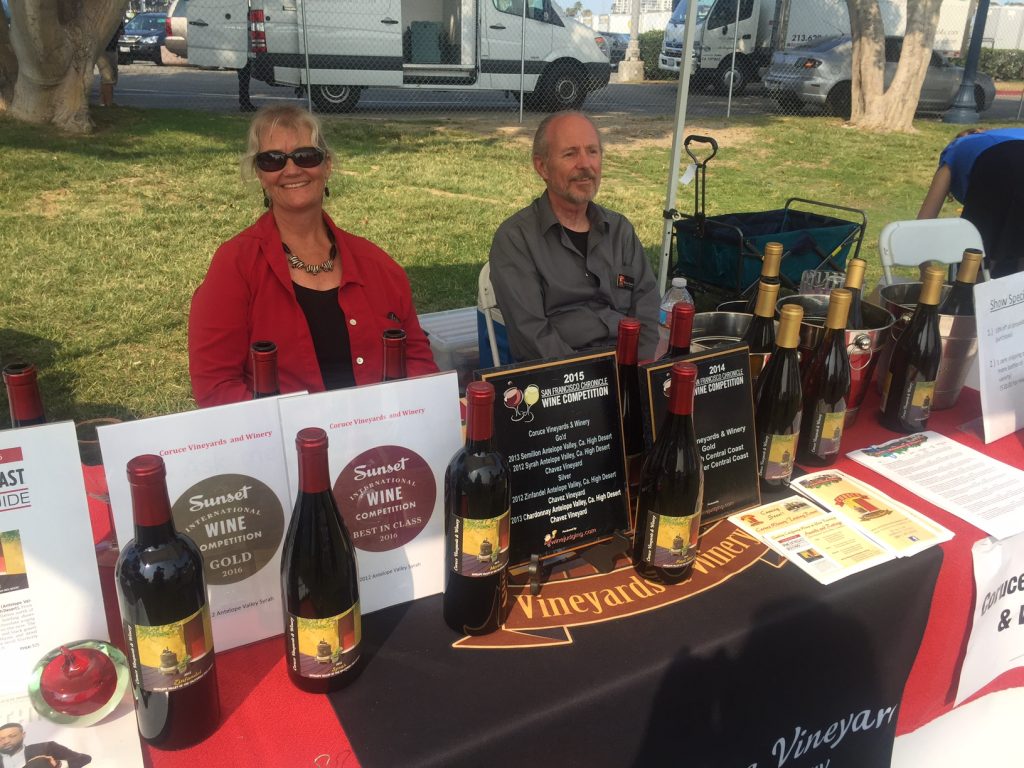 This year’s venue, the Rainbow Lagoon in Long Beach, was easy to spot with pop up tents and white chairs and dining tables that we could see as we pulled in to park. The first person I met inside was event Executive Producer Kim Vu, who was quickly followed by Long Beach Grand Cru Board of Director Tom Stolpman of Stolpman Vineyards and Stolpman Law Group; then I spotted Master Sommelier George Skorka – who I was honored to serve along with in the 2015 competition.

“I feel like we’ve put together a pretty good group” Vu commented of the dozens of wineries, brewers and restaurants that encircled the venue. I got a nice photo of her in front of the dance floor before it would soon be filled with happy twirling guests. (See all my photos in this YouTube slide show.)

We would’ve loved to have had a bottomless thirst and appetite to have sampled everything from all of the vendors listed below. But, as is the case for any guest, “palate fatigue” is a real threat! So, before that happened we truly enjoyed the vendors noted in bold:

Archium Cellars – Don’t miss their extensive line-up if you find them at an event, or go to the tasting room.

Ave Winery – Lots of wine coming your way from this growing producer, and all good. Sent a few people over to try these and they all loved them. Enjoyed the 2014 Cabernet Sauvignon and the 2013 Syrah.

Ballast Point – What fun beers – I loved the “Pineapple Sculpin” and learned that they do spirits as well!

Coruce Vineyards & Winery – Always a treat to see the Coruce people and all of their awards from Wine Enthusiast Magazine, as well as competitions from Sunset Magazine and San Francisco Chronicle.

Happy Hour Wine – They make a fun red and a white, less than $10 each, made from grapes grown in Spain. Look for them in your local supermarket.

Pagter Brothers Winery – Love what our very own Scott Pagter is doing…stay tuned to see what else he’s going to do next.

Rhythm Wine Co. – They have a wine from the “Alonso Family Vineyard” which is Juan from Le Chene!

Robert Hall Winery – Been awhile since we visited and we enjoyed the entire line-up. They were especially pleased with recent awards for their 2015 Rose from the California State Fair and a whopping 91 points for their 2013 Cabernet Sauvignon from Wine Enthusiast Magazine.

Stolpman Vineyards – The 2003 Nebbiolo from the cellar, 2012 Petite Sirah and 2014 Angeli “The Best Syrah” killed, and so did a Syrah and Sangiovese poured by the one and only Tom Stolpman.

Vinemark Cellars – Love all their wines, and love running into them at many events.

Workman Ayer – Always great to see and taste with Michel Ayer. NEVER miss an opportunity if you get one!

The Attic – A devilishly good deviled egg, and then something with tuna poke that killed me. So good.

Delightful Crepes Cafe – Hubby was happy with these!

La Brea Bakery – Thanks for the take-home baguette!

About the Legal Aid Foundation of LA

In 2015, LAFLA provided services to more than 80,000 people, including more than 10,400 children. We helped more than 39,000 people at our Self-Help Legal Access Centers. More than 11,000 people attended legal clinics and educational workshops, and we provided referrals to almost 30,000 people.

WASHINGTON (PRWEB) - Sippd has partnered with Skyy John of Tipsy Bartender, the … END_OF_DOCUMENT_TOKEN_TO_BE_REPLACED