Los Angeles, CA – Vision Films Inc. (“Vision”) has scheduled the millennial coming of age comedy Getting Toasted for U.S. and Canadian VOD release for July 12, 2022. The film is directed and written by Casey Zilbert who grew up on the New Zealand vineyard central to the film’s storyline. Produced by Steve Barr, Casey Zilbert, and Chris and Lynne Wilson. 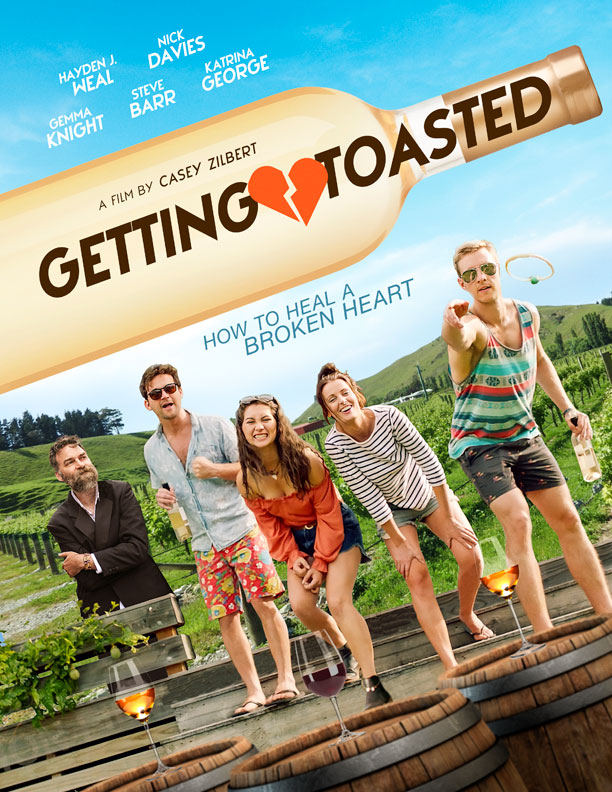 Inspired by Ernest Hemingway’s “The Sun Also Rises,” Getting Toasted is a wine-fueled comedy for the new “lost generation”: Millennials. Whether you are drinking with us or nursing one heck of a hangover – the film’s balance of “booze and bros” humor with candid character drama will have you reaching out to your besties to book a vineyard adventure of your own.

Synopsis: Friends on an epic wine tasting weekend attempt to cheer up their heartbroken buddy after he’s dumped just days before his wedding. With a beautiful vineyard and all the wine intended for the wedding at their disposal, a life-changing extravaganza of food, wine, and shenanigans set them on a new path and prove once and for all that nothing heals a broken heart like good wine and good friends.

Lise Romanoff, Managing Director/CEO of Vision Film shares, “Getting Toasted is thoroughly entertaining comedy set in an incredibly beautiful location that adds to its unique feel and message. This is the perfect film to watch with good friends and a glass of wine!”

“Getting Toasted perfectly showcases the creativity of Casey Zilbert, a first-time director from New Zealand, and a talented cast including one North American ex- pat,” adds TALK’s Terese Linden Kohn.

Getting Toasted will be available on all major streaming and cable platforms across the US and Canada on July 12.

Vision Films is a leading independent sales and VOD aggregator specializing in the licensing, marketing, and distribution of over 800 feature films, documentaries, and series from some of the most prolific independent film producers in the world. Led by Lise Romanoff, Managing Director/CEO Worldwide Distribution, Vision Films releases 2-4 films a month across Theatrical, VOD, DVD, and television platforms. visionfilms.net

Steve Barr and Casey Zilbert believe they don’t need to take themselves seriously to be seriously good storytellers. Professionally minded with the reputation of delivering on time and under budget, they specialize in playful crowd pleasers with real heart. From dance flicks to sassy chicks, rom-coms to zom-coms – SCW aims to surprise and delight, no matter the size of the screen.

About Sleepers Are Dreamers

Sleepers are Dreamers is a family owned and operated production company based in Kekerengu, New Zealand. Working from the picturesque Sleepers Vineyard (sleepersvineyard.co.nz), we are dedicated to disrupting the global wine industry with sustainable wines and scripted/unscripted content about modern wine appreciation and viticulture.

TALK is veteran sales executive Terese Ann Linden Kohn’s global sales agency whose years of indie sales and distribution experience has provided the global marketplaces with quality film, television and new media content. Representing all genres and numerous libraries for all rights and windows, TALK takes pride in the transparency and service it provides to filmmakers, distributors and programmers around the world. TALKglobalMedia.com