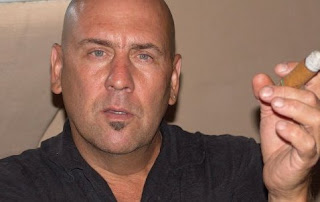 You’ve probably seen him around town; very dapper, and often with that beautiful woman on his arm. He frequents many of the Santa Clarita Valley dining establishments, and well he should. Stephen not only knows his food, but he is the local representative for food purveyor Sysco Foods.

You might have had occasion to meet Stephen and taste his wines at the recent Sunset in The Vineyards. http://www.youtube.com/user/Evewine101#p/u/19/7ANMgZ9x29Q

He was the only winemaker there pouring wines made solely from locally grown grapes.

Unfortunately, for some reason, I never seem to make it to this event.

But fortunately, I was introduced to Stephen awhile back by our mutual friend Shipwreck Bob Schwemmer.  And recently I had the opportunity to sit down with him, taste some of his wines and talk about his interest in winemaking.

Stephen started his culinary career in the mid-1990s when he attended chef’s school. As part of his training, he needed to spend time working in a restaurant’s kitchen. Through a mutual friend, he was able to meet this requirement with Juan Alonzo of Le Chene, and a friendship was sparked that continues to this day.  It continued when they decided to make wine together, planting and harvesting Juan’s vineyards and being among the first to recognize the wine potential of this area, which Stephen says now has the AVA designation Sierra Pelona.

Stephen now makes both his own wines as well as wines for Juan Alonzo at the New Robert Reyes vineyard in Agua Dulce.

Stephen brought two of his wines for me to taste. Since we were meeting at The Cellar, it was only proper to include DiMaggio in our tasting as well. And wouldn’t you know it that fellow Eve’s Wine 101 staff writer Rusty Sly happened to wander in.

Both wines Stephen brought were Zinfandels [no complaints here] – a 2007 from grapes purchased from a vineyard in Pomar Junction and a 2009 from Stephens vineyard in Agua Dulce.

The 2007 was definitely softer, and as Stephen put it “more feminine”, due to the cooler climate in the Santa Maria area which imparts a little less ripeness, color and extraction but more acid and a fragrant nose. 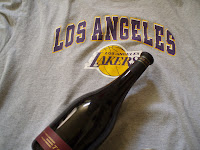 The 2009 was from Steve’s own personal vineyard and was more fruit forward of the two, and a deeper color, giving me more of what I personally look for in a Zin. Stephen said that the yellowjackets had gotten to the 2009 fruit, so he had to pump up the volume by adding some Syrah and Tempranillo from Juan’s vineyard. Well, these additions certain didn’t hurt. The wine was outstanding.

And, good news for all of us. Starting with the 2010 vintage, both Juan’s wines and Stephen’s own label will be available commercially. Seems like the local wine scene is starting to take off.

Thanks Stephen, for sharing these wines with me. I am looking forward to future vintages.