After six years at its current location at 14th and Park, Artisan is getting ready to make a move to 12th Street. The new restaurant location is adjacent to the City Park and plans are in the making for new features to add to the seasonal menu offerings that have gained Artisan such an avid following around the country.

The recently vacated “A&R” building at the corner of 12th and Pine will be home to Artisan and three other enterprises, to be announced upon final lease negotiations with the owner of the building. 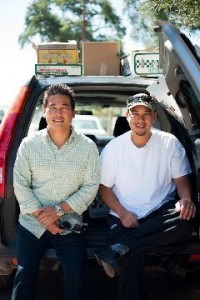 A nationally known and critically acclaimed leader in the farm-to-table dining movement, Artisan has been an integral part of Paso Robles since it opened in 2006.

Chef Chris Kobayashi frequents our local farmers’ markets and farms to ensure the restaurant uses only the best regional and organic products when available,  supporting our rich community. Working closely with local purveyors, including farmers, ranchers, fisherman and producers of epicurean products, Artisan is dedicated to tailoring their menus to showcase the best of Paso Robles and the Central Coast and elevating Paso Robles as a viable culinary destination.

Artisan plans to open the new location in spring of 2013.

The KFWE is the destination for wine and food lovers alike, affording … END_OF_DOCUMENT_TOKEN_TO_BE_REPLACED