Okay, I did it again, I used a braising sauce/starter kit from Williams Sonoma when I invited an old friend over for dinner and didn’t have time to make something from scratch.  We’ve had great luck with these sauces, they run less than each, and all I need to do is add meat, veggies and wine.

(Well not all recipes call for wine but every 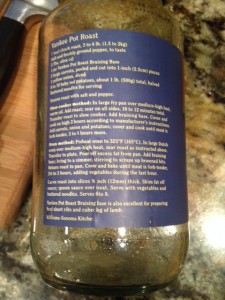 time Chef 101 Eve cooks wine is definitely out and open on the counter!)

The recipe at left, a little tough to see, is easier read from the jar.  I needed 3-4 pounds of chuck roast, a yellow onion, 3 to 4 carrots, a pound of red potatoes and a little olive oil.

You sear the meat first in the oil, then add the sauce, bring to a simmer, put in the oven for 2ish hours, adding the chopped veggies during the last hour.  (I made it in the oven instead of the crock pot, again as time was limited.)

After we removed the pot from the oven Eddie pulled some of the sauce out and reduced it, sliced the meat, plated it, the veggies went on the side.  The photo below doesn’t show the wine we started with, Vino Robles Petit Sirah, and we ended with the Buttonwood Cabernet Franc.  And, well, the men folk did have a starter of Balvenie Caribbean Rum Cask…and that dessert wine seen in the photo too… 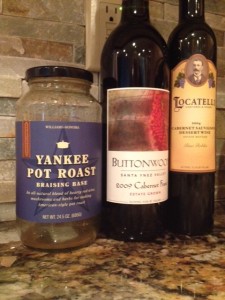