As Grape of the Night (GOTN) continues our exploration of wines from different countries, regions and states we returned to Spain to sample another wine from the old world called Albariño.  Wines from Spain are not high on most drinkers list when selecting to purchase or drink.  This is really too bad as Spain produces fantastic red wines that are very reasonably priced.

Albariño wines originated in Rias Baixas in the Galicia region of northwestern Spain.  It was believed that Cistercian monks of Burgundy known as the Cluny commune brought the introduction of a Riesling clone from Alsace France to Rias Baixas in the 12th century.  However, there have been questions on the date this occurred as Riesling grapes only date back to the 15th century.  The Cluny monks always developed vineyards in locations where they settled and built their churches.  No different than the Cistercian monks in Belgium that make beer, cheese, etc. for the community to survive.

Today Albariño grapes are grown in Portugal, Australia, Oregon, Virginia and California.  In Spain, 90% of the vines planted in Rias Baixas are Albariño where they are grown in soil consisting of granite and chalk.

Albariño vines in this region are trained to grow on pergolas as seen below. 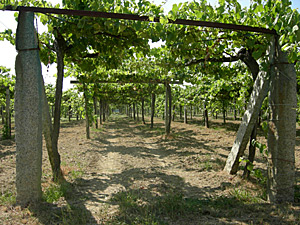 The pergola is used to keep the grapes off the ground and well ventilated since they are grown so close to the Atlantic ocean where mist from the ocean can affect the growth of the vines.  Another reason to grow the vines on pergolas is to allow the farmers to grow other types of crops below the vines making productive use of their precious land.

Albariño wines from Spain are ranked very highly offering minerality with a nice balance of acidity.  The aromatics and palate offer fantastic floral aromas and flavors of apricot and peach.  The Albariño wines tasted by GOTN were as follows:

Appellation America provides a great summary of this fantastic wine to help remember all of the subtle nuisances of this varietal.

From Appellation America
Albariño…you’re a clever fellow who’s managed to stay hidden from the public eye for far too long. Your low key attitude and green attire has allowed you to discretely blend in with the lush surroundings of your coastal Iberian home. Alas you were finally spotted, perched high on a pergola above rows of crops on the family farm. Your recent arrival in North America has done little to sway your disposition. You remain the unassuming farmer — a perfect match for Oregon and California. For the most part, but changing, the American public remains unaware of your presence as you do your thing well camouflaged amidst the Pacific mist.

As always, I would like to thank everyone that attended and our fantastic host, Valencia Wine Company.

The KFWE is the destination for wine and food lovers alike, affording … END_OF_DOCUMENT_TOKEN_TO_BE_REPLACED