Last weekend the Soroptimists of Greater Santa Clarita Valley took the greater – and by far the best – part of our weekend with their third annual “Sip, Stroll and Savor the Sounds…The Wine Affair.”

Their creations were paired with wine from the Private Cellars of Robert Schwartz, John Geraci, Chip Sterndahl, TGIC Importers Inc. and Stellar Imports. The elegant evening also included treats from Babe’s Dessert Bar and Cakery, along with savory faire from one of my favorites: The Poached Pear.

Eve Ate and Drank: I kind of bee-lined it to Robert Schwartz as I had news for him. I had heard that the SCV Wine Classic was kaput. I figured this news would shock him into giving up more of his cellared wine to me now, since he couldn’t do it there anymore. I tasted Sea Smoke Ten Pinot Noir 03 and 04, Whitehall Lane Winery 1999 Cabernet Sauvignon, Colgin 2000 (This is where Robert wanted to explain to me what a Cult wine is and I disappointed him by knowing…a wine that you have to be on a long waiting list to get and not inexpensive by any means) and then…a flight of William Selyem Pinot Noirs.

With all of the other guests headed my way I only had time to note: 03 had Port aromas and flavors, 04 was perfectly balanced, 05 was a perfect example of ripe Pinot Noir and the 06 was full of bright red fruit. I could have had more of any of them…but I had plenty to keep me busy as Chef Daniel Otto, from TPC’s Oaks Grille and the winner of the Chef Battle that night, handed me a Colorado Lamb Chop with Grape reduction that took my breath away.

From the private cellar of Chip Sterndahl I tried an 06 Miner Benedetto and an 06 Anomaly Cabernet Sauvignon. Both were outstanding. An a 06 Frank Family Reserve Zinfandel was later paired with Chef David Lawrence’s Chocolate Ganache Fleur de sel (with salt) that was served on a plate with chocolate dipped grapes. One guest called it, “Sex on a plate.”

I had an interesting Castillo De Monseran Old Vine Granacha from Spain that I really liked and a Montes Alpha Cabernet from Chile that was as tasty as I remembered it, both from my pal Chris Risdon from TGIC Importers. His wines were paired with food from Barcelona that included another lamb chop and empanadas filled with Brie and a grape sauce. Later, paired with an RL Buller Fine Muscat from Australia, was a dessert that I could only describe as possibly being a frothy crème fraiche over a graham cracker that was aptly called a “Dream Cake”.

John Geraci shared an 02 Aida Vineyard 29 red wine from his cellar while Efren Gonzales, of Robinson Ranch, had me pair it with his Proscuitto wrap of Mascarpone, golden raisins and roasted almonds. My mouth was having a little party…

The Sip, Stroll and Savor the Sounds Event

Megan Gonzalez, one of the two owners of the Poached Pair catering company (that also donated their savory scones to Friday night’s event and to me once for a glowing review), and Lauren Lefkowitz Greber, local realtor extraordinaire, volunteered with me at Valencia Wine Company. 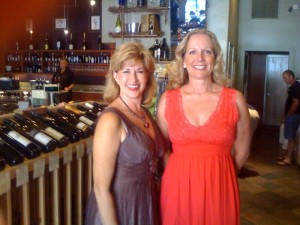 You Found Waldo/Me (A little game I played with Eve Wine 101 peeps.) marking off your cards for each of the three allotted tastes. Once, when the wine ran out of wine I was allowed to pour.

I had so hoped that would be my opportunity to thank people again, on behalf of the Soroptimists, for supporting women’s health in Santa Clarita. But, he left me with two half bottles of wine and a line that stretched from the bar to the door.

My newly attained Level Two Wine & Spirits Education did not prepare me for that. Some guests wanted all three ounces at once, some wanted wine I didn’t have, some wanted to chat with me (which was the worst as I had no time) and I ended up going 30 minutes past my shift. (Until Soroptimist Vanessa Wilk rescued me and found my relief.)

Love to write, love to chat with peeps, but pour? I left that to the professionals. Kevin Osborne, the manager at Valencia Wine Company, stepped in and pulled a great Pinotage, and then a second, off the shelf and at once calmed the crowd.

Other volunteers I wanted to say hi to at the different stations but didn’t have time (Some stopped by mine for whine!) were Dora Zavala, John and Sheryl Geraci, Julie Sturgeon, Madison Schwartz, Marcy Gonzales, Marjanne Priest, Marlee Lauffer, Pam Ingram, Rose Chegwin, Tamra Levine, Tom Lukas and Tora Brown.

A portion of the proceeds from the Wine Affair will benefit organizations that support Women’s Health in the Santa Clarita Valley. October is breast cancer awareness month and this fundraiser fit in with the Soroptimist International of the Americas, Camino Real Region “Color Me Pink and Purple Campaign”.  A portion of the day’s proceeds benefited the Sheila R. Veloz Breast Imaging Center on the campus of the Henry Mayo Newhall Memorial Hospital to help women who are unable to afford detection services.  In the past years of the event the Soroptimists have donated $5,000 and $10,000 respectively.