LOS ANGELES, California – Chef Suzanne Goin and her business partner Caroline Styne announce Noubar Yessayan as The Lucques Group’s new executive pastry chef. Noubar will be responsible for the pastry programs of all the culinary enterprises – Lucques, a.o.c., Tavern, The Larders (at Tavern, Burton Way and LAX’s Tom Brady International Terminal) and Lucques Catering. Noubar will work closely with Suzanne Goin on his dessert menus, incorporating his style to complement that of Goin, making a seamless match from appetizer to dessert in every location. Since joining the restaurant group in November, he has designed stunning plates for the weekly Sunday Suppers at Lucques, including Caramelized Apple Ribbons with Sable Breton and Prune-Armagnac Ice Cream and Chocolate Sensation – Chocolate Cremeux Bar with Cocoa Nib Crunchy and Chocolate Whipped Cream. 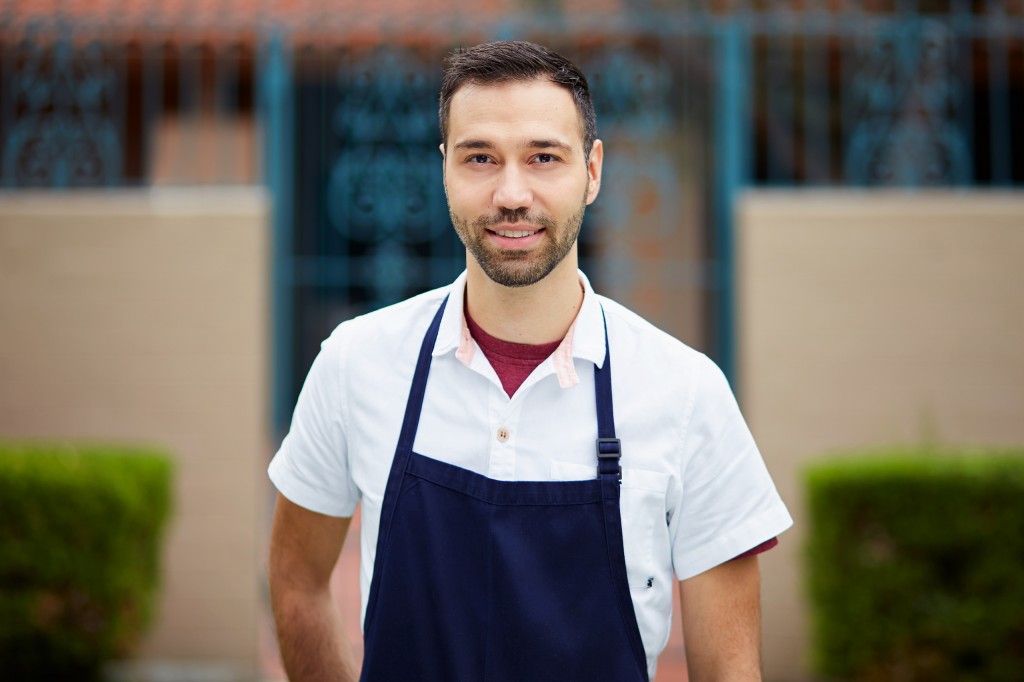 Born in 1986, Noubar Yessayan was raised in Beirut, Lebanon. He moved to California after high school and professionally trained at Le Cordon Bleu College of Culinary Arts in Los Angeles. After graduation in 2008, he was recruited to join the culinary staff of the prestigious Bastide restaurant in West Hollywood. Soon afterward, Noubar was recognized by Chef Alain Giraud for his talent, enthusiasm and savvy professionalism and began his seven-year tenure working for the renowned Los Angeles chef. He served as Head Baker and Pastry Chef at Anisette Brasserie in Santa Monica and later moved to the Pacific Palisades to open and supervise the bakery of Maison Giraud. Before joining The Lucques Group in November 2017, Noubar was executive pastry chef of the Soho House West Coast working with Chef Andrea Cavaliere.

Suzanne and Caroline are enthusiastic about Noubar’s work in just his first month with The Lucques Group. “We just love Noubar. His plates are simply beautiful and he rapidly understands how to convey the sensibility of each of our operations,” states Suzanne Goin. “We couldn’t be happier.” Noubar is eager for the opportunity to work in this creative environment, saying, “I’m very happy that my desserts and pastries have found a new home with Suzanne, Caroline and The Lucques Group.”

Noubar’s accomplishments with bread-baking, cakes, pies and other desserts earned him critical acclaim to appear as a contestant and finalist on the TV Food Network’s 2014 summer series “King of Cones” cooking show. His charisma and talent have gained him a loyal following with accolades from Jonathan Gold, Russ Parsons and Noelle Carter, last of who crowned Noubar the “Croissant King of Los Angeles.” Jonathan Gold praised Noubar’s pain au chocolat in the LA Weekly as one of the “99 Things to Eat in L.A. Before You Die.” Mixing his Middle Eastern, Lebanese and Armenian background with French culinary traditions from his upbringing and his frequent travels to France and Belgium, Noubar combines the very best of his international cooking skills and specialized training to create recipes that offer a scrupulously perfected approach to baking and cooking. His multi-cultural culinary heritage is deeply influenced by his travels and his passion for exploring new gastronomical customs and cultures.

With the opening of Lucques, their flagship restaurant, in 1998, James Beard Foundation’s 2016 Outstanding Chef winner Suzanne Goin and  award-winning Restaurateur Caroline Styne planted the seeds for The Lucques Group, a Los Angeles hospitality company that comprises two other fine dining restaurants – a.o.c., and Tavern –  and four marketplace restaurants – The Larder at Maple Drive, The Larder at Burton Way, The Larder at Tavern and The Larder at Tavern at the Tom Bradley International Terminal at LAX.  Along with these culinary enterprises, the company also operates Lucques Catering, the Larder Baking Company and comprehensive food services for the Hollywood Bowl. The Lucques Group is dedicated to seasonally influenced cooking and focuses on sourcing local, organic produce from which Goin creates soulful dishes that are bold in flavor, vibrant, layered and complex.

Did you miss me? My blogs over the past two weeks were “Vintage Eve” articles as … END_OF_DOCUMENT_TOKEN_TO_BE_REPLACED