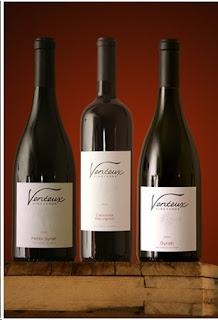 We were scheduled to meet up with the rest of our group at 11:30, but I knew there were some wineries that opened earlier. I suggested we go visit Venteux Vineyards, a producer of primarily Rhone-varietal based wines that I had visited awhile back and found to be quite good.

Scott and Bobbi Steizle had originally named their winery Fortitude, based on the effort it took to get it going. But a dispute with Foster’s Group caused them to change the name. They settled on Venteux.

According to the winery’s website, the name means “windy” in French. And it was certainly apt that day. As the weather continued to feel more like Winter than Spring, we entered the tasting room.

Sampling through their wines, I found them all to be very well made. My favorite that day was the 2007 “Tache Le Verre”, a Syrah made from grapes from the Alisos Canyon Vineyard Syrah in Santa Barbara County. I purchased a bottle of this, as well as buying [but not tasting] a bottle of Zinfandel that they had produced in very limited quantities for the Zinfandel Festival. [I am the Zin Fan, after all.]

Once again, it was approaching time to meet up with the rest of our group, so we said goodbye to the delightful tasting room staff and headed to Ecluse Wines.