ROLL YOUR LEG OVER – CHEF MIKE IS “BACK IN THE SADDLE AGAIN!”
by Michael Fraschilla (A Postscript from Barbara Ringuette can be read in Part 2 on 12/1/11)

As October 1 drew close I felt my nerves getting the best of me…. It had been years since I did the role of “Chef Mike”…. I had served as wine & food gourmand for the Wailers and now, thanks to the urging of Barbara & Lee Ringuette and Erik & Annie, I was stepping into the void… What have I missed being away from the Wailers? Will I know anyone?? Will this event live up to previous successful tastings??? 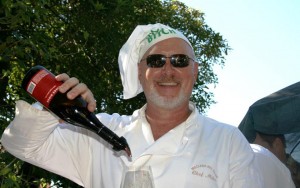 As the tasting would be in the garden of long time Wailers Barbara & Lee, that certainly put me at ease… The 1st smashing Wailer Wine Tasting I did for the club was at their same lovely home; and since they’ve done renovations making their abode even lovelier!

We got the fun rolling by 2 pm with 50 some attendees … many familiar faces and quite a number of fresh ones as well!

The wines I chose all are from the Pacific Northwest (PN), a region still new to many when thinking about world class wine… 1st class micro-brew beers & ale’s – yes, but knowing PN wines is still a work in progress! Erin Dodgen told me she needed no help with Pacific Northwest wines as she spent her formative years in Washington plastered on them!

We opened with a fresh and vibrant sparkler called Luxe – A premium release made by the folks of Domaine St Michelle (They produce bubblies for Chateau St Michelle Wines). Crisp and clean with tight bubbles, it showed off the fresh apple notes and flavors of the Chardonnay grapes from which it is made.
Next we moved to a crisp fresh Pinot Gris from Oregon made by Elk Cove. This white is extremely versatile for pairing with food or to enjoy on its own on a hot day.

Then we tried two Chardonnays from Washington – (1) a crisp, fresh, lightly oaked release produced by Columbia Crest. This “Horse Heaven Hills” Chard is not at all like their common $6 wines. It was a real pleaser for folks not wanting big oak, vanilla, or butterscotch in their Chards! (2) The Chard from Hogue is a bit more traditional, rich buttery oaked chard but still nicely balanced and not over the top.

Our white wines concluded with two Rieslings… Neither were dessert-like sweet, but more like a Kabinett Riesling with a touch of sweetness and big acidity. The Columbia Crest “Grand Estates” was a touch sweeter, while the Hogue showed a bit of minerality much like Rieslings from the Alsace region of France.

We began the reds with two Pinots from Oregon. Oregon is both famed for & argued on as the best Pinot Noir outside of the region of Burgundy, France (Some insisting that in most years Oregon Pinot Noir “out Burgundy’s Burgundy”. The first Pinot, an 09 from King Ridge was made from grapes sourced from throughout the state – a very nice easy, every day drinking Pinot Noir. The follow up was an 08 North Valley Willamette Valley Pinot Noir. A second label for famed wine-maker Tony Soter, it is loaded with fruit and chocked full of complexity! Ed “Nancy” Wolfe LOVED this Pinot Noir even while he says he loathes Oregon Pinot!
Next up was the 08 Waterbrook “Reserve” Merlot and boy did this one hit the mark for most everyone… Lush & rich, people took a liking to this Bordeaux red from Washington. I find Washington Merlot consistently better than those from California, regardless of price, and this under $20 gem proves the point!

The Bordeaux reds are well represented by the 09 Chateau St Michelle “Indian Wells” Cabernet. A big rich Cab at an amazing under $16 price… again people were loving that great Cab can be found outside of California!

Syrah and Rhone reds are the new “hot” wines coming from Washington State and one sip of the 09 Owen Roe “Ex Umbris” Syrah tells you why… Big massive burnt chocolate blackberry and pepper with a long, lingering finish – Very possibly this wine will make Wine Spectator’s Year End Top 100 List!

We concluded the red tasting with two red blends (1) an 09 Hedges “CMS” (Cab Merlot Syrah) Blend., big, robust and fruit filled for an everyday under $10 red blend; AND (2) an 09 Owen Roe Abbot’s Table Red Blend. For those familiar with Orin Swift Wines: think of Abbot’s Table as a Washington State version of The Prisoner!

We had lots of great food and wonderful, fine wines. I awarded prizes:

· The “Humpty Dumpty Award”, multiple tubes of Crazy-glue, for 1st breakage of glassware to Jackie Pfenning Vanzant… Nice job, girl, winning this prize at your first Wailer Wine Tasting!
· Also to Jackie the “Hangover Award”, aspirin and Maalox. She was the ONLY person to break a glass, so she HAD to be the drunkest!
· The “Lead Palate Prize”, a 6 pack of O’Douls, to Cindy Phillips for a complete lack of understandable reviews of the wines she tasted…. The prize was meant to be a Beck’s Non-Alcohol, however, some one was so eager for more booze, they drank the Beck’s thinking it was real beer… Now that person coulda/shoulda been our Hangover Award winner BUT the culprit never came clean to his/her crime!
· We awarded the “Odd Iketani Literary Prize” for best written reviews of the wines to Sara Swindle and Jordan Wiens, Lee and Barbara’s invitees, attending their first Wailer Wine Tasting. They both became applicants to boot!

I need to give a big shout out to all who helped to make this a great day… Barbara & Lee, Erik & Annie, & Eva, and my little helper Jackie! Of course also a big THANK YOU to everyone who attended! Seeing both old and new friends having a fantastic time reminded me how awesome the Wailers are… I’m honored to have had another opportunity to provide moments of fun & frivolity to some fantastic folks. One More Time – “Roll Your Leg Over the Wailers Are Here”… INDEED!

(Tune in next Thursday to read Part two’s postscript from Barbara Ringuette.)