On my way to what promised to be the wine dinner of the year; a first for me with a pairing from a thought-they-just-made-sushi bar and Paso Robles winery Edward Sellers, I stopped in at Valencia Wine Bar because they were hosting the event.  Say it was fate, say it was because Maru Sushi was only a few steps away…but if you say it was to see how a drunk can be managed then you would have been right.  It went like this:

A smartly dressed middle-aged woman took a seat at the bar.  Nothing remarkable there.  She quickly ordered a glass of wine.  After receiving her glass she proceeded to fold her arms on the bar and nestle her head in their warmth.  The employee that served her deftly removed the untouched glass.  She peaked through an elbow, slurring her irritations, the staffer alerted the owner.  A cab was called for and paid for.  Then it got even more interesting when two other female patrons stepped in to offer assistance.

They helped her up and to the outside tables as not to disrupt the bar and to get her closer to her taxi when it arrived.  Owner Guy Lelarge protested, as they were missing their evening to attend to his customer.  They wouldn’t be swayed.  They herded her into the cab.  Then we all walked down to Maru Sushi.  Me feeling I was in good hands if I were to make any missteps and the others, feeling the same, were now ready to start their evening!

I was delighted to be seated next to winery owner Edward Sellers and took full advantage of it.  Visiting the area of Paso Robles for golf Sellers quickly fell in love with the landscape.  He decided to buy a few acres to start.  But by the end of 2004 he couldn’t resist his fate any longer: He bought a vineyard.

He explained that he had started his winery in 2004 and now had thirty acres of vines.  Like Bordeaux or Napa where you cannot put the area’s name on a label without having the grapes behind it, his wines are all 100% Paso Robles.  His winemaker Amy Butler, he is proud to boast, is one a few female winemakers available.  Her education at UC Davis and her work at Staggs Leap and Schramsberg made her impossible not to snap up.  Their first vintage, only available in Santa Clarita from Valencia Wine Company, was 2500 cases.

As the reception began with appetizers that tickled your tongue with tastes of tomato, peaches and goat cheese, we started our pairing perfectly with their Paso Robles Viognier 2005.  Guy Lelarge commented, “A perfect floral wine, served at room temperature it shows everything”.  And I heard once again the old wine adage that when wine is only good served very cold it has something to hide.  Usually an err in flavor. 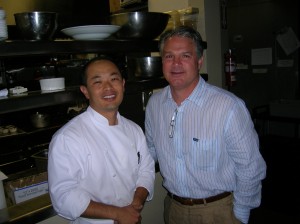 Moving on to the first course of Seared Diver’s Scallops with a blood orange Nage Over wilted Swiss chard & arugula with Paso Robles Blanc du Rhone 2005 we were equally astounded at how well “disciplined and passionate” chef Jason Park had used his fine French restaurant experience to it’s fullest.  And I was again reminded that the best fish is sushi-grade.  The scallop, the size of my mighty palm, had been slowly sliced by me to take full advantage of every bit of sauce and Swiss chard.

The second course was Pan roasted Skate Wing over Pomme Puree over Wild Porcini Mushrooms with a Warm Herb Vinaigrette and only recognized by fifty percent of the guests beforehand as fish.  Skate Wing, to which guest Dave Bossert referred to as similar to a Flounder (not an inside joke to his Disney friends), was much more delicate and flavorful.  It was to be the second dish I would not leave a scrap on my plate of.  Others, in the mood to joke, were happy to find that Skate Wing wasn’t pigeon or the collar bone of some other small animal.  The delicate fruit of the Paso Robles Roussanne 2005 was another perfect match to which Sellers remarked, “We make wine that balances the food and does not become the food.”

Next came Roasted Peking Duck Breast over a Chopped Udon Risotto with a Cherry-Syrah reduction paired with our first red wine of the evening: Paso Robles Cuvee des Cinq 2004.  This award winning wine had the room buzzing with words like “elegant yet understandable” and a wine that you “don’t have to wait four years to drink; this was made to drink today”.

We now wanted to linger when the fourth course of Lamb Sirloin Confit over Banana Fingerling Potatoes Tossed with Crème Fraiche and a Boysenberry Glaze was served with another wine I had chosen for my own: Paso Robles Cognito 2004.  Produced as a “black label” the first year; Sellers had since decided it had to be produced again. This was one of Dave Bossert’s favorite wines.  “I happened to be at the wine bar when Sellers came in with a cooler of his wines, including this Cognito, for Guy to try.  Seller’s wines showed that he’s interested in perfecting his craft, making great wines and not just making money.”

Then came our finale: Chocolate Cherry Tart Tatin with a Tahitian Vanilla Bean Ice Cream paired with Paso Robles Grenache 2004.  The Grenache was only slightly sweet as opposed to other red dessert styles with 15% alcohol and had been blended with nothing less than Chateauneuf du Pape.  This choice did not fail to please.  It was 9:30 and the crowd was buzzing. 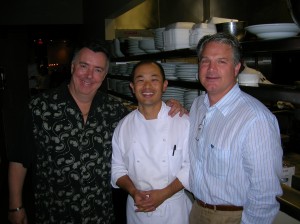 Mark White, whose business Golden Empire Mortgage, with its location above Valencia Wine Company had afforded many of us the view of his cycling home from the wine bar on more than one occasion, had this to say: “I always had my favorite wine bar – the first licensed in our valley – right downstairs and now my favorite restaurant too.  Being a resident of SCV since 1964 there has never been a better restaurant to go with these phenomenal wines!”

The wait staff, that had been attentive all evening, couldn’t help but comment that they had been getting “rave reviews”.  Add one more I thought as I made my exit; comfortable that my tastes didn’t equal more than two full glasses and that there was plenty more for those that could handle it!  If not, Guy was an expert “cab caller” on top of everything else!