Recently, we had the opportunity to attend the Buick Discovery Tour event held at the Four Seasons Hotel in Westlake Village.

So, right off the bat, you might be asking: Why is Michael writing about cars? Well, in addition to getting to see and test drive Buick’s new line up of autos, the event was co-sponsored by FOOD & WINE magazine, and that included food and, ummm, wine.

This wasn’t your typical wine and food event where you get to mill around and taste a lot of different foods and wines. Rather, it was organized into five sessions.

The crowd was divided into three groups, so they could be rotated among the first three sessions, with the final two sessions held in a large conference hall. 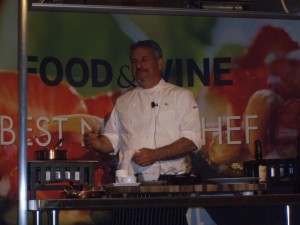 First, we got a cooking demonstration from Chef Raphael Lunetta, owner and Executive Chef of JiRaffe restaurant in Santa Monica.  Chef Lunetta showed us how he prepared: Filet of Beef, Yukon Potato and Pear Gratin, Red Flame Grapes, Sauteed Swiss Chard, Julienned Hearts of Palm and a Madeira Reduction. And, as he was wrapping up his presentation, we were served the dish he was preparing. And lest you think we were just given crappy hotel banquet food, remember this was at the Four Seasons! Delicious.

In the next room, we were presented with a dessert preparation by Chicago based pastry chef Ben Roche – Yuzo Chiboust with Coconut Rice Pudding and Caraway Ice Cream, garnished with grapefruit segments, diced pineapple, and fried puffed rice noodles. Being a cretin, this was my first chiboust, but definitely not my last, and again we were all served the dessert by the Four Seasons staff.

The third part of our day was devoted to test driving the new Buick line-up of cars. We had a lot of fun, but this is about food and wine, so moving on…

The final two sessions of the day had the entire crowd in the large conference room of the Four Seasons.

Wine expert Michael Green presented us with his version of whittling down a lengthy wine course into a short period of time. His presentation was humorous, and geared towards novice wine drinkers [even more novice than wine-101ers, and quite possibly too introductory for almost anyone living in Calfornia!]. Admittedly, I was a little disappointed to only have two wines to taste – a 2011 Rodney Strong Sauvignon Blanc and a 2011 Tapena Tempranillo – but the purpose of the wines was to teach the crowd some basics as well as showing them how the taste of the wine changes with food. This was demonstrated by tasting the white wine before and after a bite of lemon, and the red before and after a bite of bitter chocolate. Try this some time – it’s fun! 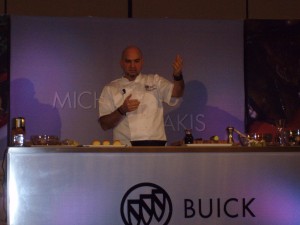 The part of the day to which I was most looking forward had arrived.  Award winning chef Michael Psilakis was giving a presentation. He gave a great talk about how he had gotten into cooking, having been an accountant and needing to take over as chef of his restaurant when his own chef had left. Of course, his love of cooking had developed long before that and his talent resulted in him achieving many awards. But, the death of his father hit him hard, of course, and his passion for food faded for awhile. It wasn’t until he and his young son shared a moment cooking together, bringing back a memory of him doing the same thing with his father, that he found his way again, with the realization that great meals weren’t about the awards, they were about creating memories.

Quite a moving story, and then we got to watch Chef Psilakis demonstrate the preparation of his Gyro Spiced Sliders, which we once again were served. Fortunately, I had saved some of my Tempranillo to go with the slider, and cap off a great day. And if that wasn’t enough, as we left, we were all handed signed copies of Chef Psilakis’ award-winning cookbook How to Roast a Lamb.