I’ve been a fan of Ventura Limoncello ever since I tried it at the LA Wine Fest some five years ago.  I feel in love with all three flavors (Original, Creamy and Blood Orange) and what I can’t find locally, I’ve traveled over thirty minutes to get my hands on.  For locals that want a taste, James Carling, one of the owners, will be coming the the WiSH Education Foundation wine tasting fundraiser I am co-hosting on 4/13! Please read the news below to find out that I’m not alone in thinking Ventura Limoncello is a true award-winner!

Ventura Limoncello Originale was awarded the Gold Medal at the inaugural Spirits of the Americas Competition. The competition focuses solely on spirits produced in the western hemisphere and is a subset of the International Wine & Spirits Competition (IWSC). Dori Bryant, IWSC Event Director stated “The premiere of Spirits of the Americas exceeded our expectations on several fronts. A broad spectrum of distilled spirits participated, including liqueur, brandy, gin, mezcal, pisco, rum, tequila and whisk(e)ys. As anticipated, entries hailed from all over the Americas, seven countries in total, with the largest number of entries received from the U.S. and Mexico. As expected, some countries triumphed in areas where they were not necessarily known for their production, such as vodka and rum from Mexico. We applaud the producers of these brands for their outstanding quality and craftsmanship.” 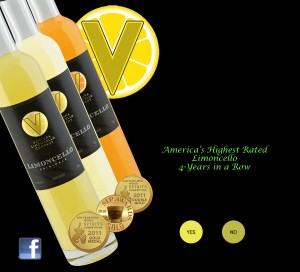 James Carling, President of Ventura Limoncello added “Being recognized as a Gold Medal winner in the Spirits of the Americas works right into our company mission of being the premier producer of Limoncello in the United States. Husband and wife team James Carling and Manuela Zaretti-Carling have been producing and marketing award winning, all-natural, handcrafted liqueurs over five years, combining Manuela’s generations-old Italian family recipes with citrus varietals grown in Ventura County, CA.

Ventura Limoncello, a Ventura owned and operated liqueur company, has secured additional distribution in Connecticut, Illinois, Missouri and New Jersey. Opici Wine Company distributes in Connecticut and New Jersey. Resonance and Pure Distribution will distribute in Illinois and Missouri respectively. “Ventura Limoncello is a great addition to these portfolios and we’re excited to add them to our Limoncello Famiglia”, says James. Their liqueurs are also available in California, Alaska, Arizona, Hawaii, Nevada, New York and Oregon.