What a night at Grape of the Night (GOTN)!  As always, my favorite group of people tantalized our palates with unique Cabernet Sauvignons from Paso Robles.  Yes, we all know the reputation of the heavy hitters from Napa and Sonoma such as Screaming Eagle, Caymus, Phelps Insignia, etc. However, during my last visit to Paso, I spoke with Daniel Daou of Daou Vineyards & Winery and discovered that he and many of the top Cab producers in the Paso area are speaking out in hopes of gaining recognition by the Cab drinkers of America.  The event kickoff was April 26 & 27 in Paso Robles by CABs of Distinction was titled, “Taste the Passion for Cabernet”.  The collective of the Cab producers in Paso at this time includes Adelaida, B&E, Chateau Margene, Daou, Eberle, Hammer Sky, J. Lohr, Jada, Justin, L’Adventure, Parrish, Record, Robert Hall, Sextant, Venteux, and Vina Robles.  I expect this collective to grow rapidly as recognition is gained. 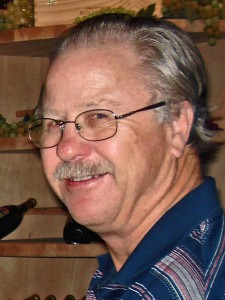 As you can see by our tasting of GOTN we had some excellent samplings of Paso including some wines from the above collective of wineries that represented themselves at the “Taste the Passion for Cabernet”, which is exactly what we did.

All of the cabs that were brought by the group were fantastic.  I need to ask for forgiveness on the wine that I brought.  Due to a hectic schedule, I waited until the last minute to look up the 2008 Kenneth Volk Cabernet Pfeffer.  During my internet search, I realized that this wine was not a Cabernet Sauvignon as it was a cross between Cabernet Sauvignon and Trousseau grapes that was developed in 1860 but due to disease was almost wiped out.  Kenneth Volk continues to successfully grow this varietal at his Siletto Ranch Vineyard.  What one notices is the pepper taste signified by the name Pfeffer which means pepper in German.  This wine shares the peppery, spicy characteristics that is usually found in Zins.

Another treat for me was based on a Paso trip last year for my wife’s birthday which is the 4th of July, hard to forget.  On the 4th, we joined Larry and Gloria Stahly at the Robert Hall Winery.  Here they have a BBQ, music, wine and a great view of the fireworks.  Earlier in the day, we toured the winery and were offered a barrel sample of one of their Cabernet Sauvignons.  The wine was destined to become their 2010 Robert Hall Cabernet Sauvignon.  This wine was spectacular straight out of the barrel.  I asked the tour guide if he could bottle a case out of the barrel and I would take it home, my request was sadly denied.  Long story short, the 2010 Robert Hall that we tasted at GOTN was from this vintage/wine that we barrel sampled at Robert Hall and bottled was absolutely fabulous.  What a memory, and many thanks to Larry and Gloria for graciously sharing with us all.

In all, the wines brought by everyone were phenomenal.  We can see that Paso is gradually making a move on gaining recognition with their Cabs.  Many still carry the French characteristics by creating Bordeaux, or Meritage as we call it, style blends.  I was not disappointed and found more wines to add to my list of favorites from this tasting.  The question is, will they get on par with Napa Cabs?  Does the terroir (especially the weather) seem conducive to providing the rich full bodied cabs that we are use to from Napa?  Larry and Gloria opened a bottle of Godspeed from Veeder in Napa to compare.  Yes, there are differences and only time will tell.

As always, it was a great evening.  I want to thank Guy for hosting our group and of course our man Geno for his fantastic service.