Settling back into my seat, I languidly surveyed my surroundings. Luxembourg’s CafeKonrad is quite the place to enjoy a cozy afternoon with friends and enjoy some fine liqueurs. My thoughts drifted back to California. Growing up in Los Angeles, I never would have thought I would adjust so well to the harsh winters of Europe. In LA when the temperature drops to 40 degrees Fahrenheit, we Angelinos are predicting the possible end of the world. A terrible day for me was when I had to put up the top on my M Roadster. Then again, my heated seats were a big help in enduring the cold just a tad longer. Ok, my apologies for having a laugh at the expense of my readers who have never been to sunny Southern California. Our weather is typically warm and lovely most year round.

Today, I am joined by long time friend and fellow sommelier, Martine Ries. Martine and I were classmates at, ESS, the European School for Sommelier. We have met today for a special tasting of spirits from the Benelux Nations, Belgium, the Netherlands, and Luxembourg. Hence the name. This economic union between the “countries of the lowlands” has been in existence since 1950. For those of you who are not familiar with this part of Europe, both Belgium and the Netherlands are often referred to as the “Lowlands,” which most scholars agree is a loose Latin translation from when the Romans controlled the region. Luxembourg, on the other hand, is referred to the “Gibraltar of the North.” This is because of the duchy’s impregnable Fortress of Luxembourg. Unfortunately, the landmark site was demolished in 1883. 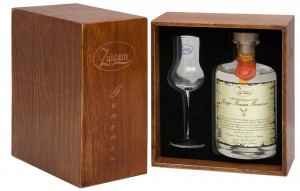 For today’s tasting, Martine selected one of Luxembourg’s most popular cafees, the Konrad. “Which spirit is up first?”

“Jenever, from the Netherlands,” she smiled as she filled our glasses.

Jenever is the national drink of the Netherlands and first distilled circa 1500s. It is a juniper based spirit that is some times referred to as “Dutch or Holland gin.” There are two types of Jenever, “oude” and “jonge” (old and new).  This reference is with regard to distilling technique, not aging. Jonge is a blended spirit, primarily from grain alcohol, and infused with juniper. However, alcohol derived from molasses or sugar beets are quite acceptable in the blending process. Oude is distilled with only grains such as wheat, rye, and or barley, along with an infusion of juniper. Oude is sometimes aged in wood, resulting in malty, woody, and smoky flavors in the same vein as whiskey.

“This is the traditional way to serve Jenever. Some even prefer it chilled or on the rocks,” Martine chuckled softly. “Purists such as yourself would balk at the thought.”

“Touche,” I chuckled. The nose on our Jenever was lightly scented with juniper, vanilla, and bread. The mouth-feel was characteristically gentle and easy to drnk. The alcohol content is 35% with a price tag of $40.

“I’m glad you enjoyed it because I know that you are not particularly fond of gin,” Martine’s eyes brightened as she smiled.

Our next selection, Van Wees Zeer Oude Jenever, is from one of the Netherlands top distillers. The nose permeated delicate aromas of juniper, vanilla, oak, and grain. On the palate, there were rich flavors grain, with notes of toffe and fudge. Aged for just over a year in oak, this oude Jenever is 37% alcohol with a price tag of $55.

“I selected two young spirits,” Martine paused lightly. “Do keep in mind that Jenever ages well, and brands that have been aged for 25-35 have also left their mark on the international market.”

Mandarine Napoleon, was it really Emperor Napoleon’s favorite liqueur? Hardly. Mandarine Napoleon though one of Belgium’s oldest liqueurs, was first distilled by Antoine-Francois de Fourcroy in 1892, dispelling the myth that the liqueur was a favorite of the Emperor.

Most Triple Secs actually contain orange peels from Curacao, while De Kuyper’s Mandarine Napoleon uses only the finest Mandarin oranges. In turn, they have been macerated for four weeks in neutral grain spirits, and then combined with exotic spices. These include, cardamon, cinnamon angelica, clove, nutmeg, along with black and green teas. The resulting liqueur is a subtle blend of tenderness and passion, and an unforgettable experience. Meant to be drunk neat, the bouquet is wonderfully scented and followed by a mouth-feel of citrus fruit that is sure to warm the cockles of your heart. The alcohol content is 38% with a price tag of $35. 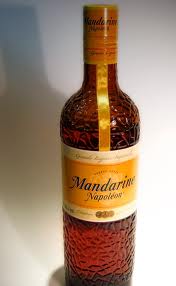 “I love the warm fuzzy feeling I get after the first glass,” Martime giggled under her breath. “Mandarine Napoleon has been known to sneak up on those who imbibe, so I will issue a warning beforehand.”

“On that note, how about another one of those little tummy warmers,” we simultaneously broke into laugher.

Modern cassis first appeared in 1841, and Luxembourg’s Chateau de Beaufort Cassero Liqueur is among the best. It is made solely from blackcurrants. All natural, dark red in color, it is a very popular after dinner liqueur. Typically it is served neat and very well chilled. However, it is popular, and quite acceptable, to serve mixed. In Luxembourg the most popular mix with Cassero is cherry brandy. Champagne, white wine, and soda water are all popular mixes. The alcohol content is 15% with a price tag of $45.

“Some of my countrymen also prefer to take Cassero with hot water,” she shook her head in non-approval. “I guess the thought here would be like a type of grog.”

“Definitely not my palate,” I cracked an amused smile. On completely different note, Agatha Christie’s fictional detective, Hercule Poirot, was quite fond of drinking cassis. I am sure that Chareau de Beaufort was among his favorites. 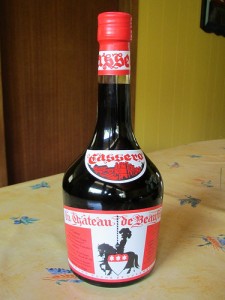