Last Friday night we let our 14 year-old daughter terrorize the mall with her friends from 5-6pm.  We figured one hour was not enough time for Paul Blart mall cop to drag them by their heels over to us at the wine bar.  (Thrilling being a parent in SCV isn’t it?)

Anyway we settled in with a bottle of Bordeaux, Chateau Lafont Menault 05 (from the Pessac Leognan region of Bordeaux, killer vintage mostly Cabernet Sauvignon, Cab Franc & Merlot) while waiting for the promised rain under the wide expanse of Valencia Wine Company’s grand blue awning.

Then these two young dudes showed up.  Jacketless.  Bullet-proof chests fresh from the bench press and a shower.  And one final thing, a thick cigar was dangling from two of their four well-muscled extremities.

We contemplated moving back inside and sitting with Soroptimist Darlene and her great-story-telling husband, Robert, but we didn’t want to be inside in case the little Cherub showed up with a boy slithering by her side outside.

I told my husband Eddie that we should just give in to it, brave it out, rely on the breeze.  In the past I would hide inside the bars, complaining that I could still smell the smoke.  What’s the point?  The wine world is-a-changin’.  And we can either grow old without it or grow young with it.

What we feared most…didn’t happen.  The young men ordered a bottle of Midnight Cellar Zinfandel 06 from Paso Robles to pair.  They didn’t get boisterous.  And…when the sweet smell did waft our way we didn’t grumble.  We gave in, or caved in, and went with it.  And you know what?  It made us stronger.

Bolstered by my new found appreciation I stealthily approached the young whipper-snappers.  I asked why they didn’t have a lighter as their wooden matches kept being blown out: “Because butane negatively affected the taste of the cigar.”  Well.

John and Sheldon, self-proclaimed computer geeks and both on Facebook, were new to drinking wine and smoking cigars.  They liked to relax for an hour as often as possible with both.  I learned a little about them and their interests that night; glad the wind decided to blow their way after all.

I was mystified, as I often am, by the new face of wine drinkers.  Fresh-faced and scrubbed up, ready to dip into the deep end of the wine pool.  And very comfortable with what they are doing. 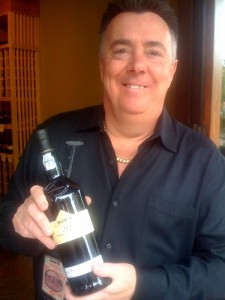 Still, with mounting interest, I asked proprietor Guy Lelarge what he would pair with cigars and he said 10 year old Ports.  “Ports and Cigars have, since the day’s of the Romans, the perfect complement after nights of debauchery! And I am being serious.” (Lelarge is pictured holding the Dows 20 Year Tawny Port) Kevin Osborne, wine director, also recommended the aptly named “cigarzin” by Cosentino wines.

Next I asked a couple of Internet friends that were available:

“While we’ve enjoyed all sorts of different wines with cigars some of the favorites are the big, bold Syrahs and Zin’s (Eno Wines, St. Amant), late harvest wines and Ports,” Said cigar and a wine enthusiast David Sanchez of Eno Wines in Berkeley, CA. “Cigars are very similar to wines with there own unique flavors and characters which are influenced by their origin, age and blends. Pairing the two together can be like a marriage made in Heaven when the right combination is found.”

Another expert opinion came from Larry Elletson, Co-Director, Tasters Guild, Central Maryland: “There is no ‘right’ answer because everybody’s taste in regard to both cigars and wine are unique.  If one liked a port or another sweet wine (stickies as we call them), I would match the port with a dark maduro wrapped cigar as the maduro wrapper does a bit of sweetness to the cigar.

Forget about trying to match a white wine with a cigar…. the cigar will just overpower the wine.  Although I may be tempted to try some of the small cigarettos from Macanudo with a fruiter white like a Pinot Gris….. that way the cigar will not overwhelm the wine as it is a relatively a short smoke.

Look for a wine that has a bit of earthiness and smoke in the nose.  Enjoy the flavors of both the wine and the cigar as they come across the tongue.  Take time to enjoy both as neither should be rushed as the flavors and nose of each will change over time.

Cigars and wine done well are things to be enjoyed.  Cigars and wine made well by those who love their craft, are a pleasure to be appreciated for what they what they bring together… the best of earth and man.”

So, in case this is on the Internet before Sheldon and John ever get back to me, I’m thinking of trying Mitch Cosentino’s Zin in about two weeks when the store is going through their remodel and adding more live music.  Now, I’m not sure I’ll go so far as smoking a cigar because…well…being a blond I inhaled when told not too.  Little to old to shake that off again.