It’s a great honor to have a winery owner make an appointment to hand deliver his latest wine to me at my home.  Now, lest you begin to think, what a fancy schmancy winery it is let me explain: 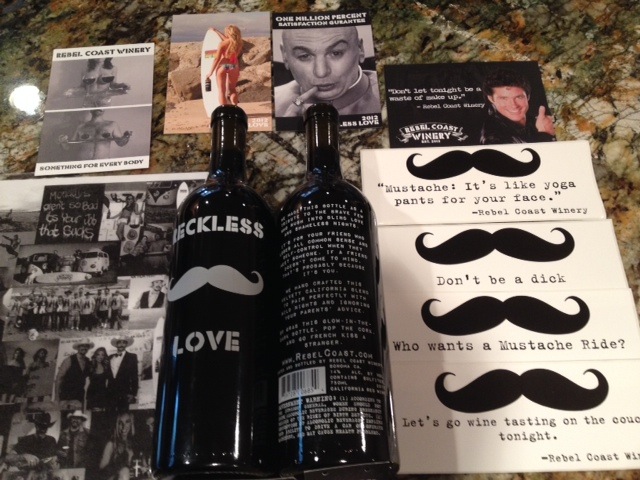 A blend of  Cabernet Sauvignon from Alexander Valley, Sonoma; and Syrah from the Westside of Paso Robles.  14 % (admitted) alcohol.

Back side: I don’t want to give this away completely, but I will say that the statements written on the bottle prompt the buyer to ignore their parent’s advice, kiss a stranger and enjoy a wild night of reckless love.  Now, let’s see how the wine tastes:

Flavor: Good round mouthfeel, juicy, mild tannins, blueberry, blackberry, mid palate spice but fruit overpowered that, and then the spice comes back at the finish.  Definitely drink now, be a rebel.

Eve Bushman has been reading, writing, taking coursework and tasting wine for over 20 years.  She has obtained a Level Two Intermediate Certification from the Wine and Spirits Education Trust, has been the subject of a 60-minute Wine Immersion video, authored “Wine Etiquette for Everyone” and recently served as a guest judge for the L.A. International Wine Competition.  You can email Eve@EveWine101.com to ask a question about wine or spirits that may be answered in a future column.

Back in 2009, or maybe even a bit earlier, I had an appointment with our … END_OF_DOCUMENT_TOKEN_TO_BE_REPLACED