I’ve been thinking a lot lately about how wine instills passion in people, from a lot of different angles. Consumers get the bug and turn into avid ambassadors and collectors of the brands they have chosen. Some of us start writing about wine, and devote countless hours to spreading the word, using time that could very well be spent on more profitable pursuits, at least from a monetary perspective. Others get into the industry from other directions, becoming sommeliers, working for distributors, running wine shops, etc.

And then there are those who get bitten by the bug so hard that they must give up everything and pursue the all-consuming passion of making great wine. 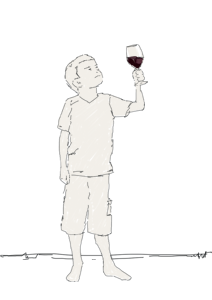 There is a new documentary making the rounds called AMERICAN WINE STORY.

The main story focuses on Brooks Winery in Oregon’s Willamette Valley. The winery was founded by Jimi Brooks in 1998. Sadly, Jimi died in 2004, leaving ownership of the winery to his then 8-year old son. Due to the efforts of Jimi’s sister Janie Brooks Heuck, along with the cooperation and cooperation of the entire wine local wine community, the winery has been able to survive and flourish, producing outstanding Pinot Noirs and Rieslings.

Interwoven with the story of Brooks are segments devoted to other winemakers who have devoted their efforts to their love of the grape, in many cases risking everything in their endeavors.  Most of the wineries featured were in Oregon, but there were also parts of the film devoted to wineries in Washington and California, as well as ones in Arizona, Missouri and Virginia. Of special interest to me was the appearance of Mike and Kendall Officer, owners of Carlisle Winery in Sonoma County. Normally camera – and publicity – shy, it was nice to see them both talk so openly about the history of their winery, especially the early struggles.

I asked director David Baker about the genesis of the project: “Truen Pence (co-producer/cinematographer) and I came up with the idea for the documentary one day when we were having lunch.  We wanted a topic that had local connections (we live in Oregon Wine Country), but was part of a national story. Truen and I have some winemaker friends and have visited a number of Willamette Valley wineries and we kept hearing similar stories about leaving careers behind and taking risks. On the cinematic side, grapevines, like people, seem to love beautiful vistas. So we knew it would be a gorgeous topic to shoot. So we started with a vague idea, and then we went out exploring, interviewing winemakers in Oregon, Washington and Northern California. It took us a couple years of exploring to discover themes, which really started to emerge when we met the Officers and the Brooks Family.”

Going forward, David said “…the film should be in various cable and VOD (video on demand) outlets in the fall. There will also be a theatrical component, with a limited release in select theaters, plus festival screenings, food and wine events, and hosted screenings with producers, wine wholesalers and other partners. Folks can follow us and sign up to receive release information via our website at http://thewinemovie.com.”

Some of the participants in the film, such as former NFL quarterback and now winery owner Drew Bledsoe, came into the field from a position of wealth. Others started on a shoestring. But, the one overriding common factor is a passion for wine.

The truth is, any number of wineries and their winemakers could have been chosen to be in this movie. You probably know some. So, yes, see this movie. The stories are great, often moving, and the cinematography is beautiful. But also remember this the next time you go wine tasting in Paso Robles, or Santa Ynez, or up to Napa or Sonoma, or wherever you like to go – there are American wine stories there as well. Take the time to learn them.