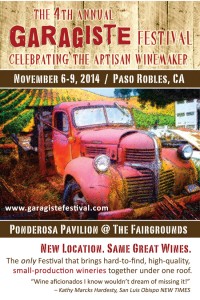 On the heels of this weekend’s hugely successful first-time ever Los Angeles Garagiste Wine Festival: Urban Exposure, Garagiste Events, producers of The Garagiste Festivals, today announced further details for its fourth annual, and flagship, festival in Paso Robles. Held November 6th–9th, this years Grand Tasting event has expanded to the Ponderosa Pavilion at the Paso Robles Fairgrounds, where over 50 high-quality, micro-production, Central Coast artisan winemakers will pour. Tickets go on sale on August 18th at www.garagistefestival.com.

In addition, the festival is bringing back some of its most popular events from previous years: Shiners, Samples and Secrets, where winemakers share barrel samples and other rarities; the Opening Round, featuring California garagiste winemakers from outside the Central Coast; two wine tasting seminars, headlined by some of the areas top winemaking experts; the festivals signature Rockin After Party and a symposium for aspiring or just starting out winemakers. All events will be held in venues in the Paso Robles area, including the Paso Robles fairgrounds and the historic Carlton Hotel in Atascadero.

”This has been a banner year for the Garagiste Festival: a greatly expanded and sold out Solvang event; our premiere festival in Los Angeles (also sold out), and now a new and more central venue for our Paso festival, with four days of our most popular events returning,” said Garagiste Festival Co-founder Doug Minnick. ”We are especially excited that this year we will be in the heart of Paso Robles, which truly is the nexus of the American garagiste movement. And while we are offering wine lovers even more opportunities to taste these fantastic wines, we continue to keep our attendee to winemaker ratio low because we believe that one-on-one interaction is the best way to make new wine discoveriesand it is what our attendees expect. We will have more exciting news to announce about the Paso festival in the months to come, stay tuned or better yet, sign up to get our free newsletter, The Dirt!”

The non-profit Garagiste Wine Festivals are the only events that exclusively showcase high-quality, cutting-edge, small-production commercial wineries that produce fewer than 1,500 cases a year, and have emerged as among the most unique and influential wine events in the US. Named one of the Top Nine Incredible Epicurean Vacations in the world by ABC News and a not to miss event by the LA Times, the festivals have introduced hundreds of outstanding artisan winemakers to thousands of passionate wine consumers, members of the trade and media, elevating the profiles of many of the winemakers nationally for the first time, and raising thousands of dollars for the education of future winemakers.

Tickets are always very limited for the Garagiste Festivals. To be alerted when tickets go on sale for the Paso Robles festival, for special discounts and for breaking news about all Garagiste events and mini-tastings, sign up for The Dirt at http://garagistefestival.com/sign-up/, or follow us on Twitter (@GaragisteFest) or Facebook (http://on.fb.me/1rgBC80).

Garagistes (garage-east) is a term originally used in the Bordeaux region of France to denigrate renegade small-lot wine makers, sometimes working in their “garages” (anything considered not a chateau), who refused to follow the rules, and is now a full-fledged movement responsible for making some of the best wine in the world. The Garagiste Festivals were the first to shine a light on the American garagiste winemaker in 2011.
buy viagra plus generic https://viagra4pleasurerx.com/viagra_plus.html over the counter

Since then, the festival has helped consumers discover the remarkable wines of hundreds of true garagistes, who handcraft under 1,500 cases a year and pay close, hands-on attention to every wine they make.

About The Garagiste Wine Festivals
The Garagiste Wine Festivals (http://www.garagistefestival.com) are the first and only wine festivals dedicated to the undiscovered and under-recognized artisan garagiste producers who are making some of the best, most exciting, handcrafted small-lot production wines in the world. Founded by fellow garagistes Stewart McLennan and Douglas Minnick, the Garagiste Festivals are committed to discovering the best and most innovative limited-production winemakers and promoting and showcasing them to a broad audience of discerning wine consumers. In addition to its flagship annual festival in Paso Robles, CA, the Garagiste Festival line-up includes Garagiste Festival: Southern Exposure, featuring Santa Ynez Valley garagistes; the Garagiste Festival: Urban Exposure, held this year at Los Angeless Union Station; garagiste mini-tastings presented from So Cal to Tahoe; winemaker dinners, a newsletter, garagiste profiles and more. Named one of the Top Nine Incredible Epicurean Vacations by ABC News, Garagiste Festivals are produced by Garagiste Events, a non-profit dedicated to furthering the education of future winemakers and those training for employment within the wine industry. Proceeds from the festivals are donated to the Cal Poly Wine and Viticulture Program.