Imagine, it isn’t hard to do…it’s 100 degrees with 100% humidity and, unless you’re inside a nice temperature-controlled wine bar, here are other choices that I am serving up for you this week that should cool you off.

I like a good martini made with Imperia vodka and what I was newly introduced to at the last LA Wine Fest: Vikingfjord  http://vikingfjord.com/ . Always shaken and not dirty with some olive that’s been sitting around marinating in its own whatever.  Years ago I was introduced to Lillet, a very delicate brand of French Aperitif wine made from 85% wine and citrus liqueurs instead of the usual Vermouth glass rinse.  Nowadays I like either Domaine de Canton Ginger Liqueur   http://www.domainedecanton.com/ or Jewel of Russia Berry Infusion.  The Key: Only use the same measure as you would of Vermouth.  Nothing other than a lemon or orange rind will float across the icy top. 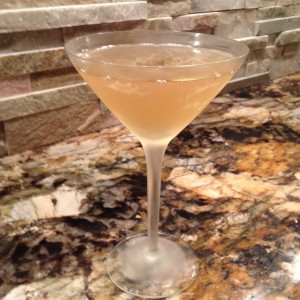 Perfect Rob Roy up with a twist.  Patrick at The Social makes it the best I’ve found Martini style – though the color, burnt caramel, is not as attractive as it is over ice.  The first time I had it was at a fire chief convention in New Orleans. We had the private room at the original Emeril’s and everyone was having hard liquor and no wine that night.  I knew I liked single malt Scotch but wanted something more like an aperitif. Voila: 2.5 oz blended Scotch, 1 oz each of sweet and dry vermouth.

Tequila: Make it easy on yourself and just go to Sabor:  http://www.saborcocinamexicana.com/  With 5 different Margaritas and almost 20 different tequilas, in each category of Silver, Reposado and Anejo, I think they take the gold ribbon for tequila selection in the SCV!

Single Malt Scotch: Current favorites from the last Scotch tasting we did in our home were the Littlemill 1990 bottled by Signatory and Tomintoul 16 year old.  The lightest color and flavor in the former makes it a perfect “first time for a lady” to try and the faint nutty hazelnut in the latter is dessert.  For everyday: Aberlour 10 or 12 year old, Balvenie, Macallan, and if you’re a Glenlivit or Glenfiddich fan, that’s fine, but try the 15 and 18 year olds if you can get your hands on them.

Beer: Not a big one for me but I get it.  Hot day = cold beer.  Tell me your favorites that are brewed locally but keep in mind that I’ve been to Oktoberfest in Munich.  At least 4 icy mug handles slide up the arms of buxom German beauties before being slammed down onto picnic tables already overflowing with tourists.  And, add the scent of cinnamon roasted almonds wafting through the air, and you’ve got the perfect pairing too!

And, yes, I was young once and did enjoy: Jägermeister when gal pal Heidi wore the shot glasses on a belt over her bikini, Yukon Jack in a goatskin boda bag while learning to ski and create my first domino effect with unsuspecting students, Kahlua and milk at  Brennan’s during the turtle races, coffee and Frangelico in one of Chicago’s mafia-owned restaurants, dark Myers Rum and OJ when in Santa Barbara for volleyball tournaments, Mai Tai’s at Tom Bombadil’s in Kona, Hawaii, after my husband couldn’t finish his as he had just completed the Ironman triathlon, Pina Coladas in Cabo San Lucas at the Hotel Finisterra while everyone else was having tequila shot into their gaping mouths by employees with a gigantic water pistols.

Last idea: We’ve not had a Bartender’s Competition in the SCV.  Would you like one?  You can judge which bartender’s signature drink you like best.  All of our SCV restaurants can sponsor one bartender each.  If it sounds like fun e-mail me what you’d like to see, or what I’ve missed in my own list above, and I’ll bite: Eve@EveWine101.com