Spain’s Great Match, now in its 21st year, is a tasting event organized by the Trade Commission of Spain, in which American importers and distributors of Spanish wines present their top products, new wines and their latest vintages to the American wine industry professionals and consumers…and offers a great education for wine 101ers! 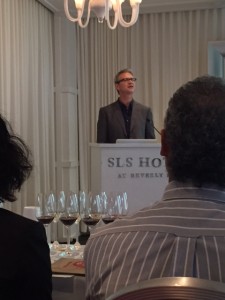 Before the walk around tasting mentioned above began, some attendees such as myself signed up for an educational lecture on two regions with nothing in common other than that they are both in Spain: Rueda and Ribera del Duero.

Steve Olson, our very entertaining and informative teacher, got started by explaining that the Rueda wine area produces white wines while Ribera del Duero is known for its reds. In this class the two would meet.

The Spanish, in Olson’s opinion, make wines to make people happy. Wine critic Robert Parker says that Spain is producing the cutting edge wines of today. The Spanish are very thirsty people, according to Olson, and with 80% of their land under vine, in the past they had kept most of the good stuff for themselves. But now Spain has realized that the U.S. is an important consumer, and there are much more imports available.

As we viewed slides of the two areas, Olson explained that Spain enjoys “an incredible food and bounty…plenty of produce in Spain.” As the “fourth most mountainous country in Europe” most vines have been planted 20,000 feet above sea level. The terrain allows for acidity, ripeness, minerality and freshness in the wines. And while the soil is calcareous in Ribera, it is more clay based in Rueda.

A wine from Rueda only has to have 50% Verdejo to be called a Verdejo; and it must be 85% if making Superior Verdejo – the remaining percentage is usually filled with Sauvignon Blanc. The wines we were about to taste in the class are all l00% Verdejo. Now Sauvignon Blanc is only used in the less expensive Spanish wines according to Olson.  And the top Verdejos are more aromatic, with notes of fennel, licorice, and some have a nutty quality.

All of the wines we were to taste in the class were hand picked and hand sorted.  Though to keep grapes fresh, and to harvest at night, they are slowly going for more machinery.

In Ribera the days are warm, and at night it cools off. The cool ocean breezes are from the Atlantic as Ribera is not on the eastern side of Spain. The wineries produce low yields, have a longer hang time and are usually under 14% alcohol. Ribera is one-fourth the size of Rioja.

As we readied ourselves to begin the tasting Olson said, “If you’re in Ribera and you want a white wine most likely you will be given a Rueda.” So to Olson, the seminar was a perfect paring:

WHITES (Aroma and taste are separated by ; and prices for all are suggested retail)

Lemon, pear, grapefruit, slight creamy hints; same notes with a nice acidity to round it off. Very well done. My favorite of the whites.

Orange, sweet honey dew melon, pink lemonade, honey, caramel apple; Not as crisp as the first wine we tasted, the fruit is not as strong on the palate, dry, want food, maybe Manchego cheese, interesting. $24

Single vineyard, up in the hillside. $35 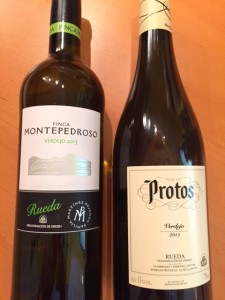 At press time these two additional Verdejos were shipped to me for review:

No drainage, gravel, Tinto Fino 100%, estate grown, aged in American oak for 24 months and then one year in bottle before release. $50

Pungent, tinny, raspberry, figs; palate similar with the addition of drying tannins. Would like to have roasted meat or a nice charcuterie plate with olives and hard cheeses.

Lovely balance of dark fruit and spice, ending with a hint of mint; happy to have the same expert balance on the palate, dry finish cries out for just one more sip.  This might be my favorite of the reds though the Reserva is excellent, just totally different.

Following the class was the walk around tasting of Spanish wine and fare – beyond Rueda and Ribera. Unfortunately, I had been slightly injured in an accident with an employee (he was pointing to someone without looking and jabbed me in the throat) that is, at press time, still sore. Anyway, I did make it to some of the tables (Sabor olives, Cheese from Spain, Amontillado Los Arcos Sherry, Finca Hispana, El Seque Alicante, Vina Albina, Tapas from The Bazaar, Trus Crianza, Las Rocas…) but not nearly as many that deserved coverage, which I’m confident my fellow press allowed. However, I did take a few photos of the tasting if you care to check them out via this Facebook album link: https://www.facebook.com/eve.bushman/media_set?set=a.10204245974576960.1073741887.1455706632&type=1&pnref=story

Wines from Spain is a promotional division of the Trade Commission of Spain based in New York. For 30 years, Wines from Spain has been committed to increasing the awareness of Spanish wines throughout the United States through education, informational materials, special events and promotions. For further information on specific wine regions and producers, please contact: Wines from Spain, Trade Commission of Spain, 405 Lexington Avenue, 44th Floor, New York, NY 10174-0331 or visit www.WinesfromSpainUSA.com.