Long ago, before the internet took over all our lives, I became a fan of Zinfandel. At the time, it was always a good bet to look for the three Rs of Zinfandel. What? You say there’s no R in Zinfandel? You’re not looking closely enough. If you bring your face closer to the monitor, and squint a little, you should be able to see Ridge, Rosenblum and last, but definitely not least, Ravenswood. I always knew that these wineries would provide me with high quality and interesting wines to satiate, at least temporarily, my Zinfandel loving palate. 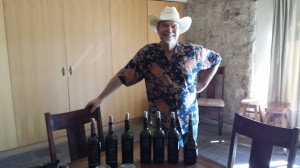 As my obsession with wine grew, and with the internet making research so much easier, my search for new up and coming wineries overshadowed my interest in the older wineries that had already achieved great success. All that kind of came full circle a few months ago when my wife Karen and I had the opportunity to attend the Historic Vineyard Society Vineyard Tour and Dinner. Not only were we hanging out with the likes of Mike Officer of Carlisle, Tegan Passalacqua of Turley and Morgan Twain-Peterson of Bedrock, but Joel Peterson, Morgan’s father and backer of Bedrock as well as being the founder of Ravenswood, was not only there but the tour guide on our bus. I took advantage of pauses between his tour guide duties to ask him a lot of questions about the old days as well as what was going on at Ravenswood currently.

Fast forward to our current trip to Sonoma, and I knew I wanted to meet up with Joel again if at all possible. Fortunately his schedule permitted – you never know, as Joel had just gotten back from a trip to Canada. [It turns out Ravenswood Zinfandel is very popular there, as well as in Kuala Lumpur and the Nordics. Who knew?]

Ravenswood makes three different “levels” of wines, plus their mixed black blend known as Icon. We skipped the workhorse Vintners Blend series and sampled heavily from the County Series and Single Vineyard Designates, finishing with the Icon:

Here are some paraphrased comments in italics from Joel while we sampled the wines we were tasting:

Winemaking is stopping the spoilage process somewhere along the way.

Wines have their “alcohol sweet spots” and the key is balancing between that alcohol level and acid.

Ravenswood was one of the first wineries to label wine as coming from Lodi.

The Dickerson Vineyard Zinfandel gets its distinctive bright flavors due to the vineyard being infected with leafroll virus. Sadly, the Ruby Cabernet that was also planted in this vineyard was too far gone with this virus and had to be pulled out. [MP: This vineyard is special to me, for reasons you might be tired of reading about. If you are so inclined, I explained it here: http://evewine101.com/2014/07/05/perlis-picks-historic-vineyard-society-tour-dinner-part-2/]

The Belloni Zinfandel is 78% Zinfandel, the rest being various mixed blacks such as Alicante Bouschet. It is typically the last vineyard picked each year.

The 119 acre Bedrock Vineyard was planted in the mid 1850s and went through a few different owners before being acquired by Joel Peterson and son Morgan-Twain Peterson in 2004. As with many of the old vineyards, this is a mixture of other black grapes, although primarily Zinfandel. [MP: I was especially interested in this as I am a big fan of the Zinfandel that comes from this vineyard, both under the Bedrock winery label as well as other producers, most recently Limerick Lane.]

Old Hill Vineyard was planted in 1862. This brought up the topic of who planted Zinfandel in California. While the Italians are often credited, New Englanders brought cuttings from the East Coast as they moved West.

The Icon is a mixed black blend from five different vineyards.

The wines were universally outstanding. It was interesting to compare the nuances of the various vineyards, something you can really only do with a side-by-side tasting. As an added treat, knowing my affinity for the Dickerson Vineyard, Joel brought out a bottle of the 1987. While not all Zinfandels [in fact, not all wines] can age, this Zin had, very gracefully. Some of the bright fruit had faded, but there was still plenty in evidence along with the added complexity that the integration of aging brings.

Joel was pretty much destined to get into the wine industry, even though he started his career as a medical researcher. But then, both his parents were chemists, yet had deep interests in food and wine. Joel’s mother helped edit Alice Waters’ first cookbook and his father started the San Francisco Wine Wine Sampling Club (now San Francisco Vintners Club). So, when Joel and Joe Swan had a fateful conversation at the Vintners Club, he already had a lot of wine knowledge and it was no surprise that he ended up working with Swan for four years before starting Ravenswood in 1976.

When I met Joel earlier this year, I told him I considered him to be the “Godfather of Zinfandel”. He just smiled. I should have known that I was not the first one to call him that. But, the title fits, as Joel is greatly responsible for the current state and popularity of Zinfandel. And, I’m happy to report that I shouldn’t have been ignoring Ravenswood. The wines are great!