First of all, I apologize for w[h]ining so much in my article two weeks ago. I’m sure we are all glad I got that out of my system. There will be no complaining this week, I promise.

I’m probably dating myself when I say we used to eat at Hamptons in Burbank. Back in the day, in what was the original House of Pancakes, right across the street from the iconic Bob’s Big Boy on the Toluca Lake border, Hamptons was ahead of its time, serving gourmet burgers paired with glasses of high end Bordeaux wines. 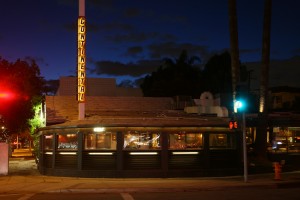 The property became available in 1995, and Jay Sadofsky snapped it up, opening Mo’s, which became a popular spot for locals and movie studio personnel alike.

Now, 20 years later, Jay has decided it is time for a change. He and partner and Executive Chef Jesse Genovese have created an exciting concept with Continental, named after the 1934 song which won an Oscar for its part in the movie The Gay Divorcee. I think of the place as “updated classic”. The décor reminds me of old Hollywood but with modern appeal, the dishes are familiar but with delicious creative touches, and the cocktails, flavored with ingredients like absinthe and agave nectar, took me back to simpler times yet gave a nod to the current craft cocktail movement.

And speaking of beverages, Continental has a great by the glass wine list, put together by Doug LaGambino of Spin The Bottle Wine Studio just down the street in Toluca Lake. From this list you have many wonderful choices, such as the McPrice Myers “Terre Blanc” blend from Paso Robles, Red Newt Riesling from the Finger Lakes, Banshee Pinot Noir from Sonoma, and Barrel 27 “Right Hand Man” from California’s Central Coast, among many others.

The beer lovers aren’t forgotten either, with a great selection of beers on tap and by the bottle, such as 805 Blond Ale, The Citizen Lager, Allagash Black Stout. They even do tasting flights!

My wife Karen and I had the pleasure of attending the pre-opening party at Continental. In order to give guests the opportunity to taste as many of the menu items as possible, we were treated to miniature versions of many of them. Great examples of some of Chef Jesse’s signature items were presented, such as the brisket, Thai-inspired bouillabaisse, and salmon. The chickpea cakes were delicious satisfying even to this dedicated meat eater. And the mini burgers took sliders to a whole new level, substituting crispy pancetta for the usual bacon. 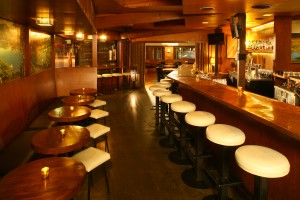 The La Jara Prosecco, Vaughn Duffy Sauvignon Blanc and Owen Roe Cabernet Sauvignon made tasty accompaniments to the food presented, and I even went for a couple of the craft cocktails being provided – the Christopher Oaxacan (with mescal, pineapple juice, lime juice and agave nectar) and the Hendrick (with Elijah Craig bourbon, sugar, bitters and absinthe).

I would have to say that the party was a great success. Not only was the food delicious but the level of service was very high. All of the servers were clearly proud of the new place, and it showed. And owners Jay and Jesse made the rounds to make sure all the guests were enjoying themselves as well.

When we left the party, Karen and I looked at each other and we both said “We need to come back for dinner!” So we did, a few days later.

Greeted warmly by the hostess and our server, we explored the menu, determined to try something we did not have at the party. We started with the shaved radish and fennel salad and the calamari. The salad was full of fresh flavors, and the calamari was some of the best I have ever had – flash fried with just enough batter to enhance that great calamari taste. Karen ordered the seasonal risotto and I ordered the skirt steak. The risotto was full of delicious seafood. And the skirt steak was cooked and seasoned to perfection. Following these with a dessert of canele pastries and our evening was complete. 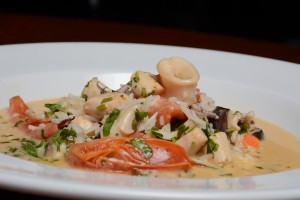 Chef Jesse is clearly extremely talented and has created a menu that reflects his experience cooking in Europe and New York, as well as here in Los Angeles, combined with the classic flavors he is showcasing. The food is truly delicious and we are looking forward to frequent visits to try the rest of the menu. Adding in the level of services is what really elevates this restaurant. All the waitstaff are clearly very well trained and are deeply committed to the success of the Continental. It shows. And Jay and Chef Jesse make their presence known. As I watched them work their way around the room, touching every table and making sure every guest was satisfied, I knew Continental was going to be a great success.